In case you’ve been keeping an eye out for HTC’s Facebook button with a mobile phone attached, the HTC ChaCha, you’ll be happy to know we’ve just received our review unit and have been putting it through its paces. By which we mean pressing that Facebook button. A lot. That and staring confusedly at the G1-style chin that afflicts the surprisingly great hardware keyboard. 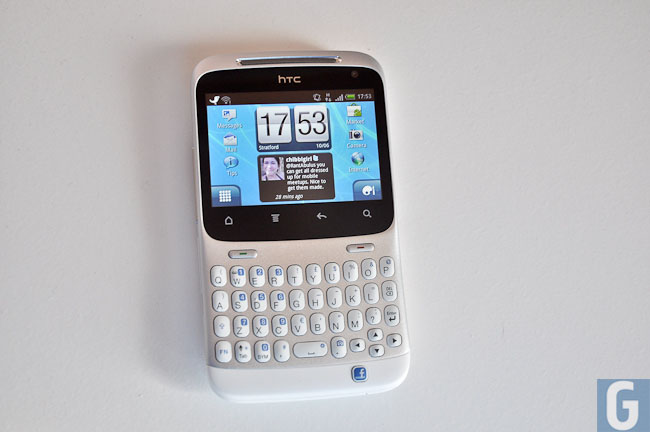 Despite the full keyboard and the separate arrow keys, the 2.6″ 320×480 screen is still very much capable of receiving touch input, partially belying the low-end impression this particular form factor has come to be associated with among Android handsets. However, the lack of Flash support despite an 800 Mhz processor and the non-standard resolution denying access to the entirety of Android apps means this is certainly closer to the featurephone end of the Android scale.

No doubt the Facebook tie-in must have occasioned more than one groan and cry of “why didn’t we think of that?” in competitor’s halls. It will also be a huge selling point if only on account of its simplicity, even if there are no other bells and whistles to it and the Facebook integration doesn’t really extend further than that solitary button.

It is, however, small, supremely pocketable, it sports a reliable and gloriously clicky little keyboard and about the quickest access to Facebook short of having it beamed straight into your brain.