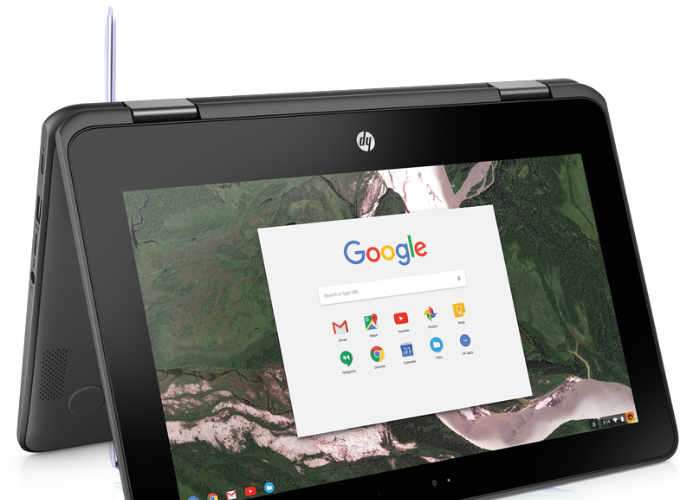 Google and HP have joined forces to create a new rugged Chromebook which has been specifically designed for educational uses and takes the form of the HP Chromebook x360 11 G1 Education Edition.

Unfortunately no specifications have been released for the new Chromebook x360 at the current time but as you can see from the image that includes a 360 degree hinge and comes supplied with an “optional” stylus and a secondary “world-facing” camera on the keyboard side.

Google explains more over on the official Google Blog :

Today we’re excited to announce HP is bringing its addition to the family with the HP Chromebook x360 11 G1 Education Edition. HP’s rugged 360 degree convertible Chromebook will feature USB-CTM charging and optional stylus and world-facing camera capabilities designed for the specific needs of schools.
 
These new devices—and the dynamic ecosystem of content and apps they support—help evolve technology usage into one that is anchored in student content creation. For example creative apps on Chromebooks are now available in Sweden and other European countries at a discount from select resellers. In addition, Chromebook administrators are now able to approve a library of Android apps and install them on select managed Chromebooks.

As soon as more details are revealed by either HP or Google for the HP Chromebook x360 11 G1 Education Edition which is expected to be available during mid-April 2017 will keep you up-to-date as always.