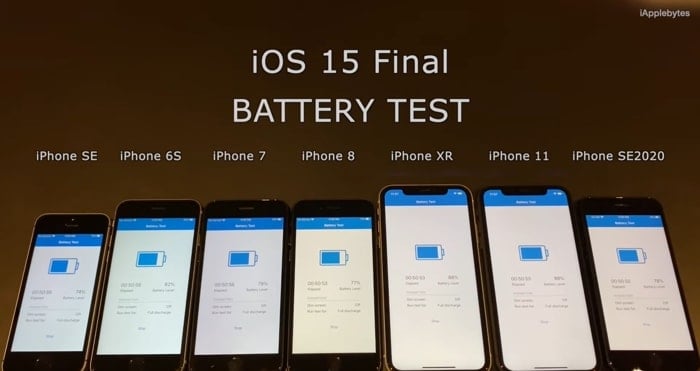 We recently saw a battery life test for the iOS 15 Release Candidate and now we have another test for the final version of Apple’s iOS 15.

The video below test the battery life on the recently released iOS 15 software on a range of iPhones, this includes the iPhone SE, iPhone 6S, iPhone 7, iPhone 8, iPhone XR, iPhone 11 and the 2020 iPhone SE.

As we can see from the video there do appear to be some minor battery life improvements on the final version of Apple’s iOS 15 over the previous Release Candidate version on some devices. Other devices are about the same.

The latest version of Apple’s iOS software is now available to download and it bring a range of new features to the iPhone.

This includes Apple’s new Focus Mode which is designed to help you focus on what you are doing and cut down on notifications. You can customize this so you only get the notifications you want.

There are also a range of other new features and changes in this new version of iOS, this includes updates for Safari and Mail with improved privacy settings and more. You can download the latest version of Apple’s iOS software by going to Settings > General > Software update on your device.