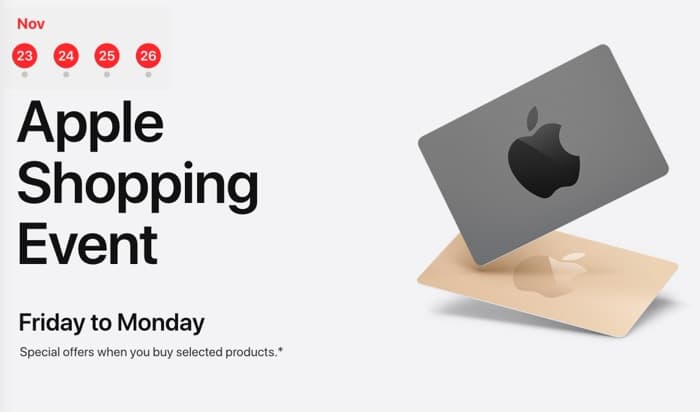 Apple has sent out an email to its customers about the deals it is offering in the UK for Black Friday and over the weekend.

As in previous years, rather than giving a discount, Apple will give you an Apple Store Gift Card when you buy certain devices.

The iPad deals apple to the iPad, the iPad Mini and the 10.5 inch iPad Pro, for example if you buy the entry level iPad for £319 you will get a £40 gift card.

Apple is also offering these deals on a range of Macs which include the MacBook Pro, Macbook Air, MacBook, iMac and iMac Pro and the Mac Pro, you can get up to a £160 gift card.

finally Apple is offering up to a £40 gift card on the Apple Watch Series 3 and up to a £40 Gift card on the HomePod, Apple TV 4K and Apple TV, plus up to £40 on some Beats headphones. It looks like Apple’s latest iPad Pro, iPhone XS and iPhone XR handsets are not included in their deal, you can find out more details at the link below.