Finding apps optimized for tablets in the Google Play Store can be a hassle as it doesn’t show them in a way App Store does for the iPads. However, it seems everything is about to change as Google announced on the Android Developers Blog that it will make changes to how tablet-optimized apps are displayed in the Google Play Store and increase their visibility for the users. The search engine giant also mentioned that  these changes will also encourage the developers to optimize their apps for tablets. 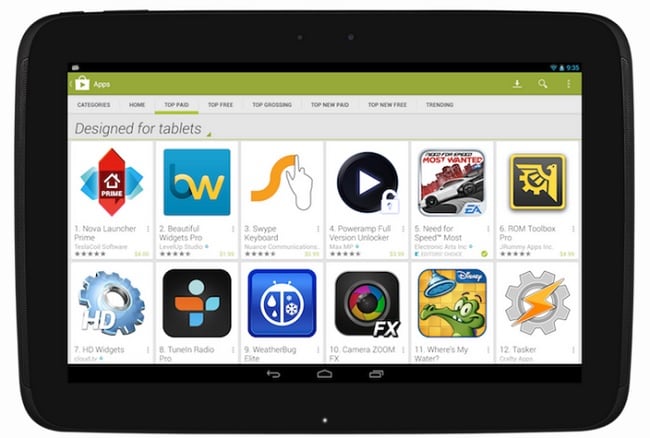 Earlier this year, Google introduced the “Designed for Tablets” section where users can discover applications that looks good on larger displays. Google released the list of guidelines that developers should meet in order for their application be listed in this section. But, starting November 21, the criteria will be expanded to all sections of the Google Play Store.

Now, “Designed for tablets” section will be the default view for the users browsing Google Play Store on a tablet including all of the top lists (Top Paid, Top Free, Top Grossing, Top New Paid, Top New Free, and Trending). The applications will also be labelled “designed for phones” when browsing on a tablet — those apps who don’t meet the tablet criteria.

On November 21, the Play Store will make a series of changes so it’s even easier for tablet users to find those apps that are best for their devices. First, by default, users browsing Google Play on a tablet will now see apps and games that are designed for tablets on the top lists (Top Paid, Top Free, Top Grossing, Top New Paid, Top New Free, and Trending). Tablet users will still be able to switch the view so they can see all apps or games if they choose. Also starting November 21, apps and games that do not meet the “designed for tablets” criteria will be marked as “designed for phones” for users who browse the Play Store on tablets.

To help the developers, Google added tablet optimizations tips and checklist to the Developer Console. These can be used by developers to make sure that there applications meet the defined criteria and help them list their applications as “designed for tablets” in the Google Play Store.