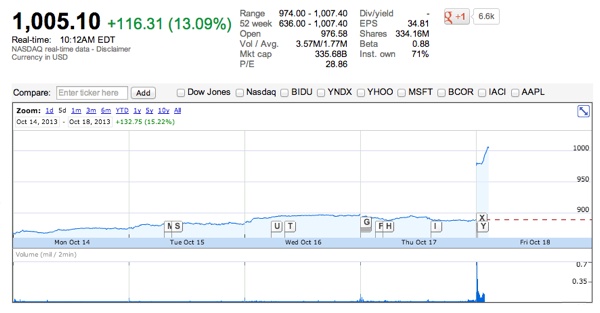 A company’s stock price doesn’t denote how well a company is doing, it shows how much people believe in the future of the company. Right now, a lot of people think the only way Google is going to go is up, and they have a good reason to believe that.

Google’s stock spike is due to it reporting stronger earnings than anyone thought it would. It’s been consistently growing due to its success in such a large variety of markets, from its search engine dominance to its success with Android that has it currently beating the iPhone. Google breeds success, and everyone knows it.

Oddly enough, Amazon has a larger stock price at $330 than Microsoft, $35, or Facebook, $55. Of course one announcement can change the game entirely, but I highly doubt anyone is going to see the type of stock success Google is for quite a while.

Ready to give in to your Google overlords now?