Not long now until the Google I/O 2013 developer conference, it takes place between the 15th and 17th of May at the Moscone Center in San Francisco, and Google has now updated their Google I/O Android app.

The app is available to both developers and non developers and it comes with a range of new features, Google has also released details on their streaming hub where you will be able to watch the event on your computer, smartphone or tablet. 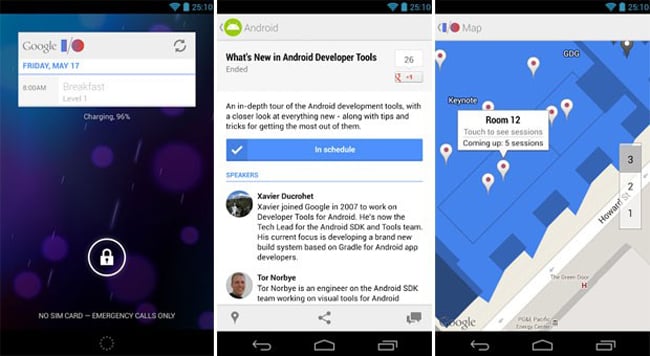 Stream 4 channels of technical content on your computer, tablet, or phone. You’ll feel like you’re right there in the keynote and session rooms, listening to product announcements straight from the source. Live streaming will run on developers.google.com/io from 9 AM PT (16:00 UTC) to 7 PM PT (2:00 UTC) on May 15 and 16.

Watch exclusive interviews with the Googlers behind the latest product announcements. This year, GDL will be on site, broadcasting one-on-one product deep dives, executive interviews, and Sandbox walkthroughs from the GDL stage.

Get the latest news in real-time. We’ll be posting official announcements during I/O. You’ll be able to see the feed on the Google I/O homepage, in the I/O mobile app (coming soon), and on +Google Developers.

Never miss a session. All Google I/O technical sessions will be recorded and posted to GDL and the Google Developers YouTube channel. Subscribe to our YouTube channel for archived session updates.

You can find out more details about the Google I/O developer conference over at Google, and download the Android app from Google Play.