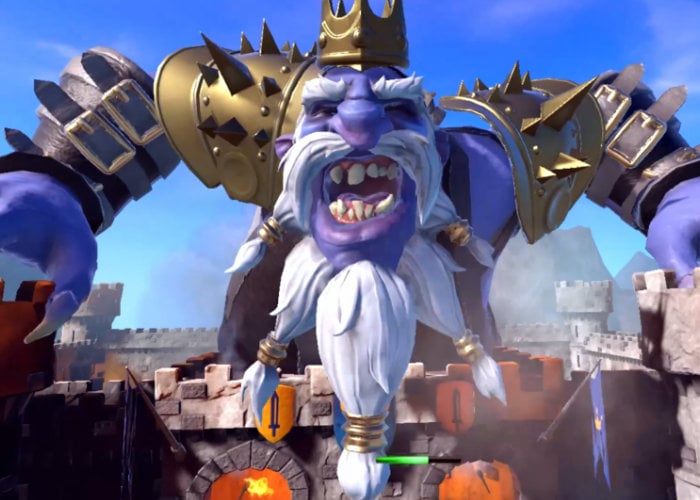 Developers at Knock Twice Games are gearing up to launch their new virtual reality giant combat game Good Goliath later this month making it available on the PlayStation VR platform and PC VR supported headsets. Checkout the announcement trailer below to learn more about the game which will be officially launching later this month on March 31, 2020.

Good Goliath is an arcade-action game where the player is a giant battling hordes of little foes. With wave-based tower defense gameplay where players are the tower, catch, dodge and throw pitchforks, barrels, and even tiny enemies.

“In Good Goliath, players are the giant and battle against hordes of pitchfork wielding villagers, cavalry mounted soldiers, and even flying devilish imps. With wave-based tower defense gameplay where players are the tower, catch and dodge pitchforks, barrels, and other weapons as they are launched even grab some of those tiny villagers out of the air as they launch themselves and use them to knock out their friends! Battle armies of bitty foes, formidable mini-bosses and colossal monsters as you play this arcade-action experience. From castle mountain tops, shark-infested pirate islands and creepy caverns, unleash the powerful thrill of being giant in Good Goliath.”

Features of the Good Goliath VR game include :

– Full Campaign: Fight your way through medieval worlds, oceans overrun with pirates, and the realms of the underworld as you explore 12 levels rife with mini and massive bosses. Seek out hidden treasure in order to customize your experience to unlock new sets of hands – you never know when you can use an extra pair!
– Enemies Are Your Ammo: Who needs a sword when you have an angry little villager being thrown at you? Use not only pitchforks and barrels to defend yourself, but catch the tiny humans that launch themselves at you and throw ‘em back! Your ammo is only limited by what or who you can catch. But not everyone is your enemy – keep your eye out for your friendly neighborhood baker floating through levels with some cake to help you get back to tip-top health.
– Storybook-Style Comical Worlds: Dive into themed biomes, such as Medieval, Pirate, and Hell World, each filled with unique bosses and enemies. The storybook art style appeals to players of all ages.