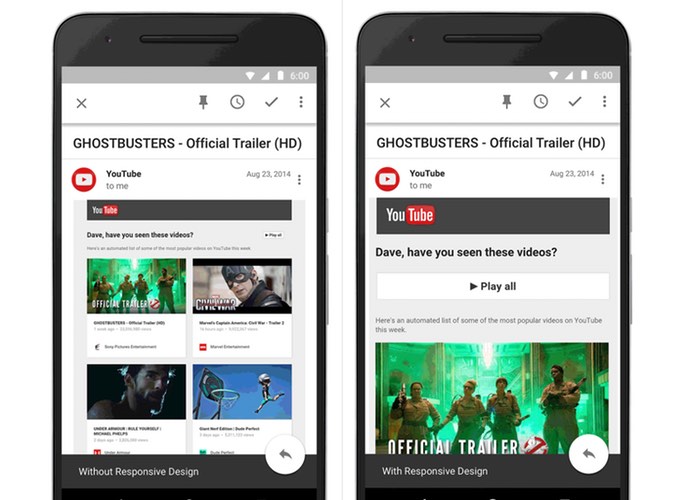 Google has this week announced that a new responsive design will be rolling out to their Gmail service with an aim of providing a more optimised layout for every screen.

The new support is expected to roll out in the coming weeks, and will remove the different formatting is that can sometimes be a hindrance when you start reading an email on your desktop and then carry on via a mobile device.

Have you ever opened an email on your phone and something about the formatting just looks … off? Maybe the text is hard to read, or the buttons and links too small to tap. That’s because many emails are still formatted for computers’ larger screens, which means reading them on mobile can be a hassle.

Starting later this month, Gmail and Inbox by Gmail will support emails created with responsive design, meaning their content adapts to fit screens of all sizes. Text, links, and even buttons will enlarge to make reading and tapping easier on a smaller screen. If you’re on desktop, you’ll also see improvements, since emails designed for mobile can also adapt to fit larger screens.

These changes will make your email experience as comfortable and intuitive as possible. And as responsive design becomes more common, you’ll continue to see emails that fit better on all your screens and devices.

When you send emails, your recipients might read them on a computer, tablet, or phone—or more likely, all three. However your message might look different on all these devices. Later this month, you’ll be able to use CSS media queries with Gmail and Inbox by Gmail to ensure that your message is formatted the way you intended, whether it’s viewed on a computer, a phone in portrait mode, or a tablet in landscape mode. You’ll be able to change styles based on width, rotation, and resolution, allowing for more responsive formatting to optimize your email for every device.

In discussions with email designers, these supported CSS rules were identified as the most useful media queries to support responsive design. This is just one part of an overall effort to expand CSS support in Gmail and to give email designers more control over how their messages are rendered. For example, the CSS below applies the color red when the screen width exceeds 500px.