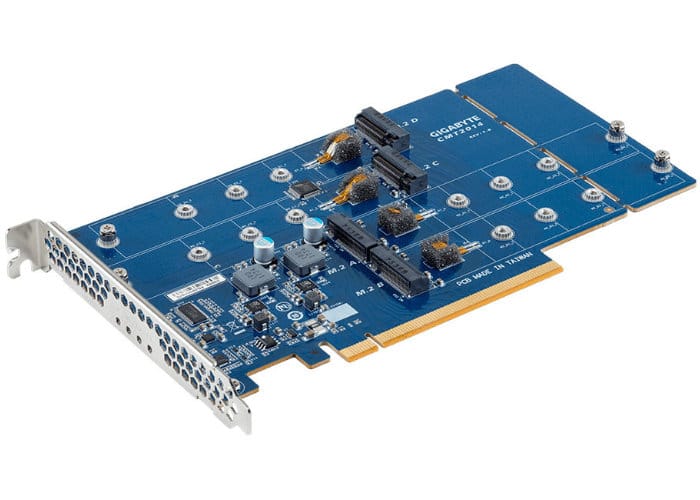 This month Gigabyte has revealed a new addition to their range of expansion cards with the imminent launch of the Gigabyte CMT2014, which has been designed to convert a PCI-Express gen 3.0 x16 slot into four 32 Gbps M.2 PCIe slots, using PCIe lane-segmentation on the motherboard.

Specifications include : full height form factor, support for up to 4 x PCIe Gen3 x4 M.2 drives, type 2242/2260/2280/22110 support, up to 128Gbps transfer speed and PCIe x16 (Gen3 x16 bus). The expansion card offers a similar functionality to the ASRock Ultra Quad M.2, and the ASUS Hyper M.2, but lacks any mechanism to cool the drives. Offering four M.2-22110 slots with PCI-Express gen 3.0 x4 wiring, two of these slots face forwards, and the others backwards. If you have requirements for M.2-2280 smaller drives, you can physically and irreversibly break off a piece from the end of the card to reduce its length down to 185 mm from 210 mm.

Other features of the Gigabyte CMT2014 expansion card include power/activity LEDs for each of the four slots, and temperature sensors. Unfortunately, no information on pricing or worldwide availability has been released as yet by Gigabyte, but as soon as information comes to light, we will keep you updated as always.