At Computex 2013 at the beginning of this month Gigabyte launched their new small form factor mini PC systems in the form of the Gigabyte BRIX GB-XM1.

Gigabyte also unveiled another new addition to their Gigabyte Brix range with the unveiling of the Gigabyte BRIX GB-XM1 which is equipped with a pico projector and doesn’t require a monitor to be used. 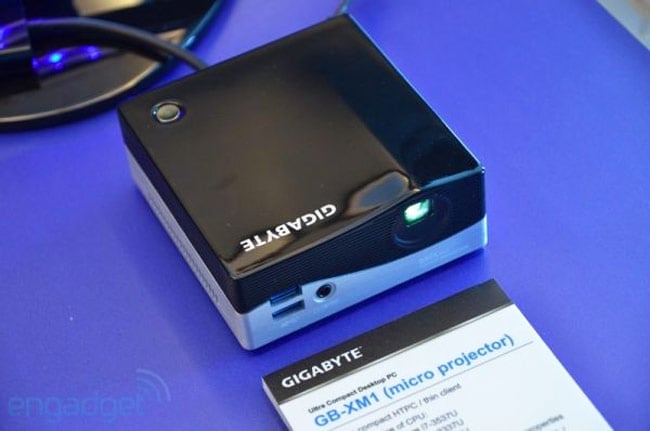 The Gigabyte BRIX GB-XM1 has a thicker form factor than other in the range due to the additional pico projector, which offers between 50-80 lumens of brightness.

The Gigabyte BRIX GB-XM1 pico projector model projects a WVGA image of 800 x 480 pixels and can be fitted with a choice of Intel Celeron, Core i3, Core i5, and Core i7 processors depending on your needs and requirements.

Unfortunately no information on pricing or worldwide availability has been released as yet by Gigabyte, but as soon as information comes to light we will keep you updated as always.