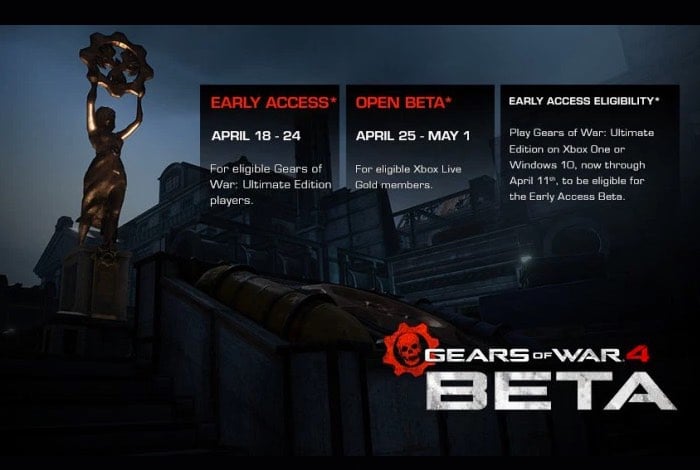 Major Nelson has today announced the start date for the Gears Of War 4 Multiplayer Beta which will kick off on April 18th, 2016 and as you might have guessed already is an exclusive Xbox One event.

From April 18th onwards those gamers that play the Gears of War: Ultimate Edition on either Xbox One or Windows 10 systems will be awarded tokens in waves for early access to the beta gameplay development stage.

Following the conclusion of early access on April 24, all qualifying Xbox Live Gold members on Xbox One will be invited to join the beta until it ends on May 1. In addition, we’re extending the timeframe for Gears of War: Ultimate Edition players to qualify for early access to the Gears of War 4 beta from March 1 to April 11. To qualify, just log on to Xbox Live and play Gears of War: Ultimate Edition on Xbox One or Windows 10 by 11 p.m. PDT, April 11.

For more information on the new Gears Of War 4 Multiplayer Beta jump over to the Major Nelson website for details via the link below. Major Nelson also revealed details about the Season 2 Finals and Fan Activities at PAX East :

We are also excited to announce that we will be joining you at PAX East in Boston and will be hosting a variety of fan activities, including:

*The Gears eSports ESL Pro League Season 2 finals will be LIVE from Boston at PAX East on Saturday, April 23. Fans can tune into the Gears of War Twitch channel to watch the best Gears of War ESL Pro teams square off for the championship title. We are also excited to announce we will be increasing the prize pool for Season 2 to $60,000 thanks to fan support of our Season 2 bundles! During the stream, we will also debut the worldwide exclusive reveal of a new competitive game mode for Gears of War 4. Those watching from home can tune into the stream for instructions on how to get the special Season 2 Finals weapon skin and a chance to win a limited edition custom Gears of War 4 console.

*The Out of the Shadows: Inside Gears of War Multiplayer with The Coalition panel on Sunday, Apr. 24 at 10:30am in the Albatross Theater featuring a deeper dive in Gears of War 4 multiplayer and some special surprises. We’ll also be offering up some great prizes to any of our fans who turn up in Gears of War Cosplay! Gears fans who can’t make the show can take part in the fun from home LIVE on the Gears of War Twitch channel!

*Lastly, fans at PAX East will be treated to Gears of War 4 Versus multiplayer located in the Xbox Booth.