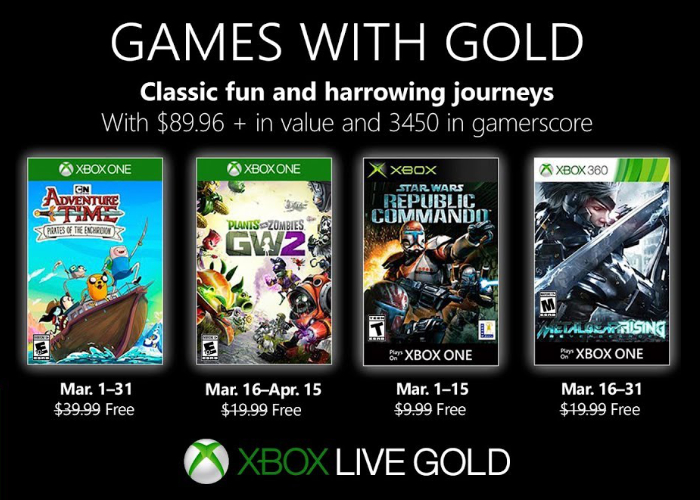 Major Nelson has today announced the free Xbox live games but will be made available for gamers with Gold during March 2019. Following in the form of previous months Xbox Live Gold members will receive four new free games, two on Xbox One and two on Xbox 360 as part of the Games with Gold program.

Live Gold members can enjoy and download the Adventure Time: Pirates of the Enchiridion for free during the month of March, saving the $40 price tag. Later in the month Plants vs. Zombies Garden Warfare 2 will be available from March 16th to April 15th saving you the $20 price tag. Check out the video below to learn more about the four new free Xbox games being made available during March 2019.

“Play together with Xbox Live Gold. March’s 2019 Games with Gold lineup for Xbox One includes: Adventure Time: Pirates of the Enchiridion and Plants vs. Zombies Garden Warfare 2. For Xbox 360 owners (and through Xbox One backward compatibility), March kicks off with Star Wars Republic Commando, followed by Metal Gear Rising: Revengeance. March’s lineup provides over $89 dollars in value and up to 3450 in gamerscore.”