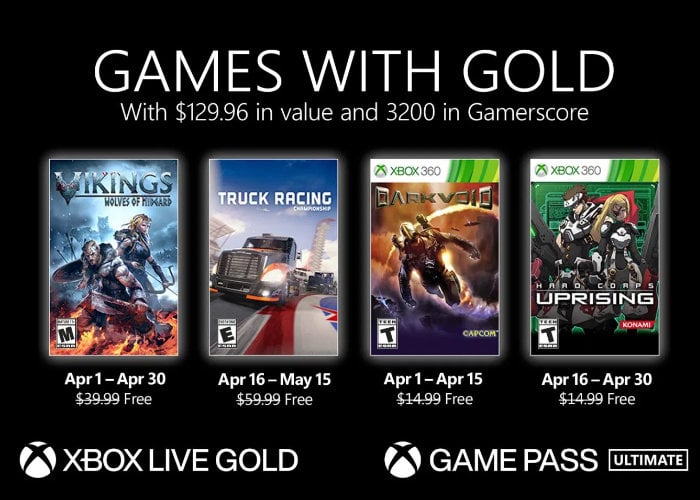 Microsoft has today announced the three Xbox games subscribers will be able to enjoy with Games with Gold for April 2021. The April Games with Gold lineup for the Xbox One and Xbox Series X|S, enables you to battle mythical beasts in Vikings: Wolves of Midgard, as well as drive heavy big rigs to victory in Truck Racing Championship.

Backward Compatibility titles in this months Gold for April 2021 enable you to step into the Void and fight on land or in the skies in Dark Void, and play the spiritual successor to Contra in the shooter game, Hard Corps: Uprising.

Vikings: Wolves of Midgard
Journey to the shores of Midgard, a world based on mythology with a fantasy twist. Join a notorious band of Viking warriors and take up the fight against the fearsome Jotan and the beasts of Ragnarok. Master mighty weapons including sword and shield, two-handed hammers, axes, and bows, and vanquish the fiendish creatures of Fimbulwinter which threatens to end all life.

Truck Racing Championship
Take the wheel behind giant 5-ton, 1,000 horsepower semi-trucks in a completely new racing experience. Featuring all the unique challenges of the European Truck Racing Championship, drive 45 different vehicles in 14 worldwide circuits. Consider the weight of the truck when cornering, monitor tire wear, and find the best tactics to win the race.

Dark Void
Step into the Void, a sinister parallel world full of hostile aliens and deep mystery. Dark Void showcases powerful weapons, where a combination of ground-based combat and jetpack powered dogfights bring a thrilling dynamic. Experience the seamless transition between fight and flight in this epic adventure.