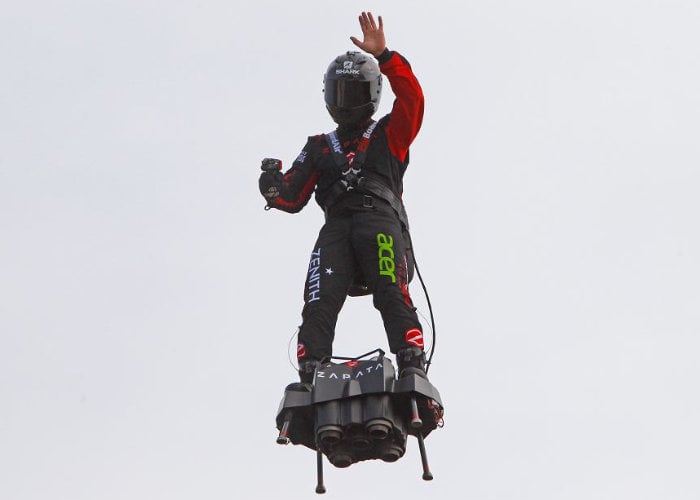 After a recent unsuccessful attempt to cross the English Channel using his jet powered flyboard. French inventor Franky Zapata has now successfully crossed the Channel completing the 22-mile (35.4-km) journey in 22 minutes. During the flight Zapata reach speeds of up to 170km/h or 106mph.

Unfortunately the first attempt failed during a planned refuelling stop, when Zapata missed the waterborne landing area and landed in the Channel. Mr Zapata, a former jet-ski champion explained : ”We made a machine three years ago… and now we’ve crossed the Channel, it’s crazy,” – “Whether this is a historic event or not, I’m not the one to decide that, time will tell,” he added.

Zapata started with a budget of €20,000 euros to develop the Flyboard and after several prototypes he finally managed to design that could be stabilised in the air by means of under foot and hand controls. After patenting the invention, he presented the Flyboard for the first time during the World Cup in China. The first flights were recorded and posted on YouTube and received 2.5 million views in just 15 days. France’s military has also sought to develop the technology for itself, and recently gave his company, Z-AIR, a €1.3m ($1.4m; £1.28m) grant.