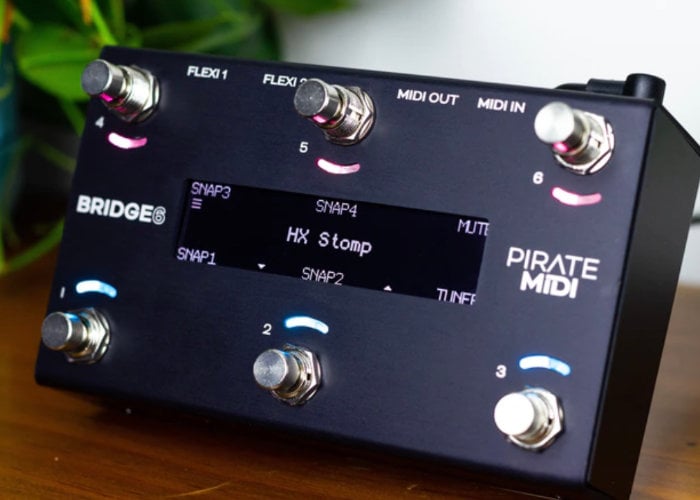 Australian audio specialists Pirate MIDI has taken to Kickstarter this month to launch their new next-generation MIDI foot controller aptly named the Bridge6. Designed to provide musicians with an affordable MIDI foot controller with “no compromises”. The MIDI controller is equipped with an OLED screen silent switches, USB-C, config app and more.

Special early bird pledges are now available for the recently launched project from roughly $221 or £167, offering a considerable discount of approximately 0% off the retail price, while the crowd funding campaign is under way. If the Bridge6 Kickstarter campaign is successful and production progresses smoothly, worldwide shipping is expected to take place sometime around March 2021. To learn more about the Bridge6 project view the promotional video below.

“MIDI is an amazing, powerful tool. It’s a longstanding part of music creation and technology – it’s implementation in various products has inspired the evolution of modern music. Thousands of effects units, pedals, amplifiers, synths, keyboards, apps, and DAWs have extensive MIDI implementation. A well-designed MIDI controller can help you tame and master the amazing potential of MIDI for music creation. “

“We decided to build a MIDI foot controller because most controllers are difficult to use, confusing to program, and lack basic features and quality hardware. We’ve spent the last 12 months testing and prototyping to make a truly intuitive and powerful MIDI controller that doesn’t skimp on features and allows you to connect all your gear.”

The Bridge6 was designed from scratch by Sam and Simon in New South Wales, Australia after they met through mutual interest in building MIDI controllers. For a complete list of all available early bird pledges, stretch goals, extra media and engineering specifications, jump over to the official Bridge6 crowd funding campaign page by following the link below.