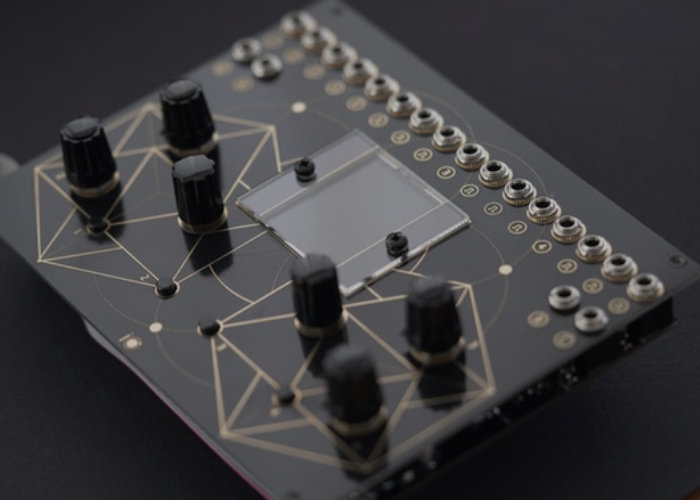 FLUX a ‘Temporal Modulation’ complex rhythm sequencer has launched via Kickstarter this month and already blasted past its required pledge goal with still 27 days remaining on its campaign. The FLUX is an “algorithm that warps time with a user programmable curve”. If like me you are unsure exactly what Temporal Modulation Synthesis is, In Orbit Labs the creator of FLUX explains a little more.

“Temporal Modulation Synthesis applies a curvature to time, creating rhythms by modulating the linearity of trigger distribution within a step (each step can output a density of between 1-64 triggers). This video shows the density of a single step sweeping from 1 to 64. Trigger distribution can be modulated with a range of TM curves. Each curve has a possible curvature value ranging from -10 to +10 in 0.01 increments (2000 possible curvatures). Positive curvature values produce logarithmic curves (triggers are grouped tightly towards the start of the step and ramp down in density as the step progresses), negative values produce exponential curves (triggers are sparse at the start of the step and density increases across the step). A curvature of 0 results in linear spacing (the selected number of triggers are distributed across the step length with equal spacing). This video demonstrates applying a logarithmic curve with a curvature value sweeping from 0 to +10 in 0.02 increments”

“With Flux, I aimed to create a rhythm sequencer that went beyond quantized rhythms. I wanted the ability to compose true polyrhythms, Euclidean rhythms, realistic and complex rhythms easily. Developing Flux with these goals in mind resulted in the Temporal Modulation Synthesis algorithm. I believe that with Flux I have now arrived at the perfect set of parameters to interact with the TM Synthesis algorithm easily. The ARM Cortex-M7 provides the processing power to execute the module with 64-bit double floating point precision, calculating rhythms with an extremely high degree of accuracy.”

Early bird pledges are available from £299 and worldwide shipping is expected to take place later this year during August 2020. Jump over to the official Kickstarter project page for more information, full specifications and the complete list of all available pledge options.