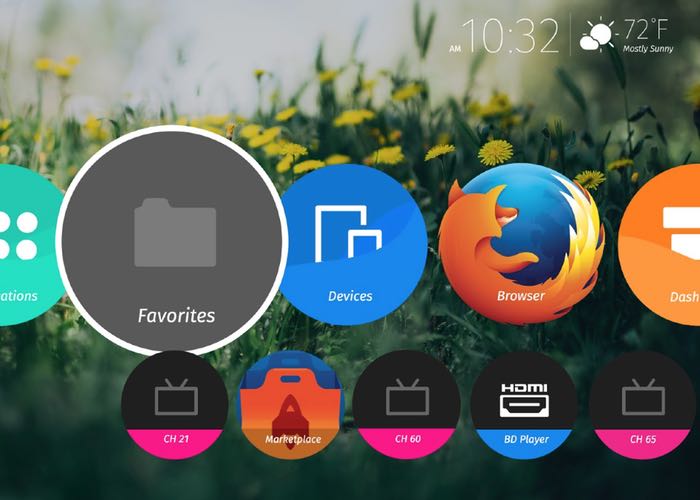 Over the weekend Mozilla has unveiled more details about how their new Firefox OS TV operating system will function and look like when loaded on to large screen displays.

Mozilla has provided more details about their ideas for a connected home and how they have moved away from smartphone interfaces into other areas of the house by revealing the user interface for Firefox OS TV for larger screens.

Mozilla explains that a television can be used to display content from various input sources such as HDMI, DLNA, cable, SAMBA, etc although each user’s input source priority can be customised. Mozilla has also included a Firefox OS TV quick functioning global navigation to enable users to find what they need quickly. Mozilla explains :

“From our research insights we realized that a flat and single pathed UI will satisfy our users’ needs, this requirement translated well with the use of a card metaphor. Shown in the diagram below, the cards are aligned in a single file. Each card represents an entry point to content or service. The default set of cards are comprised of the four basic functions of a smart television

• TV: your live television feed
• Apps
• Devices: anything connected to the television
• Dashboard: An overview of all your content

As well as the importance of applications on smart televisions is growing rapidly, so its vital to frame the UI hierarchy giving equal (or balanced) weight to television channels, apps and input devices.”

For more information on the new Firefox OS TV operating system jump over to the Mozilla Blog website for further details and screenshots.