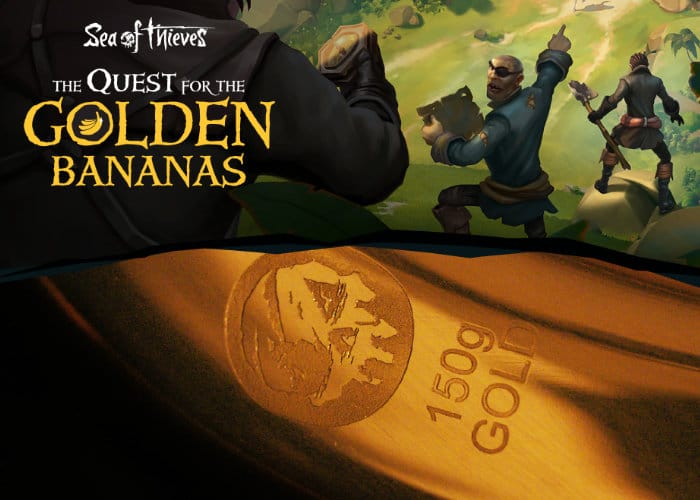 When the new and highly anticipated Xbox and PC online multiplayer pirate adventure game Sea of Thieves launches on March 20th, 2018. Sea of Thieves developer Rare and Microsoft have announced a new digital treasure hunt that will offer £80,000 in prize money if you can find the “Golden Bananas”. Watch the reveal video below to learn more about the Quest for the Golden Bananas. “The legendary treasure of the Golden Bananas has been stolen. Are you and your crew the pirates who will find it?”

To enter into the digital treasure hunt simply down three pirate crew of up to 4 people and from 8:00AM GMT, a new clue will be released every 3-4 hours over 3 days. “Answers to these riddles could be anywhere, so look sharp. There are 15 fiendish puzzles to solve!”

Once you have your answers “enter each answer into one of the 15 blank spaces in the Passage. But you won’t be able to submit them until all 15 puzzles have been released, so keep track of your answers as you go. When you have filled in all 15 answers in the Passage, submit your crew’s entry. The fastest crew in each region with all the correct answers will be invited to take part in an Ultimate Test – where one victorious crew will win the Golden Bananas!”

For more information on the Golden Bananas digital treasure hunt jump over to the official Sea of Thieves website ahead of its March 20th, 2018 launch.