Fans of the Final Fantasy VII game are sure to appreciate these 3D printed characters from the game which were posted over on the Reddit website yesterday and have been created by Joaquin Baldwin.

For those that are not aware Final Fantasy VII was released back in 1997 and is a role-playing video game developed by the now named Square Enix and as you can tell by the name is the seventh instalment in the Final Fantasy series. 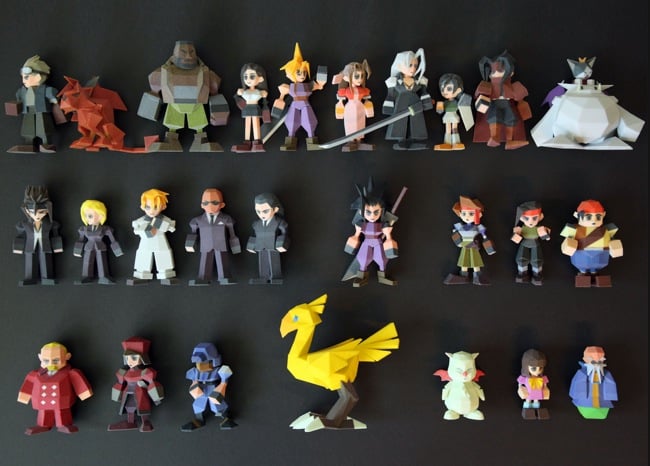 The Final Fantasy VII Characters 3D printed are available to purchase for around €16 each from the Joaquin Baldwin website. Enjoy!

“The nine main playable characters in Final Fantasy VII are Cloud Strife, an unsociable mercenary who claims to be a former 1st Class member of Shinra’s SOLDIER unit;

– Barret Wallace, the leader of the anti-Shinra rebel group AVALANCHE; Tifa Lockhart, a martial artist and a member of AVALANCHE, also a childhood friend of Cloud’s;

– Aerith Gainsborough, a flower merchant who has been pursued by Shinra’s special operations unit, the Turks, since childhood;

– Red XIII, a wise lion-like creature who was experimented on by Shinra scientists;

– Cid Highwind, a pilot whose dreams of being the first man in outer space were not realized;

– Yuffie Kisaragi, a young ninja and a skillful thief; and Vincent Valentine, a former member of Shinra’s Turks unit, who was experimented on 30 years prior to the start of the game.

– The game’s main antagonist is Sephiroth, a former member of SOLDIER who reappears several years after he was thought dead.”