So as not to arouse the suspicion of authorities, let it be writ that the Mechatron is totally harmless. Sort of. That’s because it only packs an electric pellet gun. Now, if it fired rockets—you wouldn’t want to mess with the Beatty family if that were the case.

The paternal Beatty and his daughters (yes, daughters!) used a bunch of Arduinos and lots of  parts to assemble this mobile machine. It weighs somewhere in the neighborhood of 40 pounds and puts DARPA’s own robotic ventures to shame. 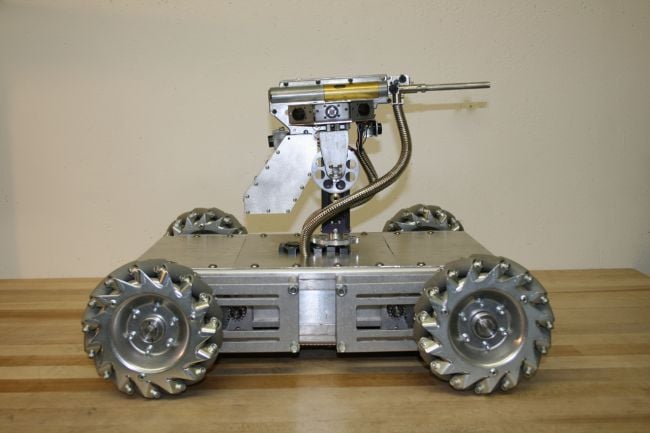 What’s also incredible is the mobility of the Mechatron. It can go places and since it’s a small machine, it’s got a little stealth to it, too. If you’re wondering if this was built in the cheap, you’re in for a surprise. According to Mr. Beatty he burned through thousands of dollars to put this together. If it did cost just several thousand dollars, however, that’s an achievement in itself. How much does the DoD spend on its own robots and UAVs , again?

To be honest, the Mechatron would have been gnarlier if it had a pair of arms. That way it can better overcome obstacles and even pick up objects. We just love the ingenuity the Beatty’s have put into this family project. Hopefully Mechatron isn’t the last we ever hear or read about them.