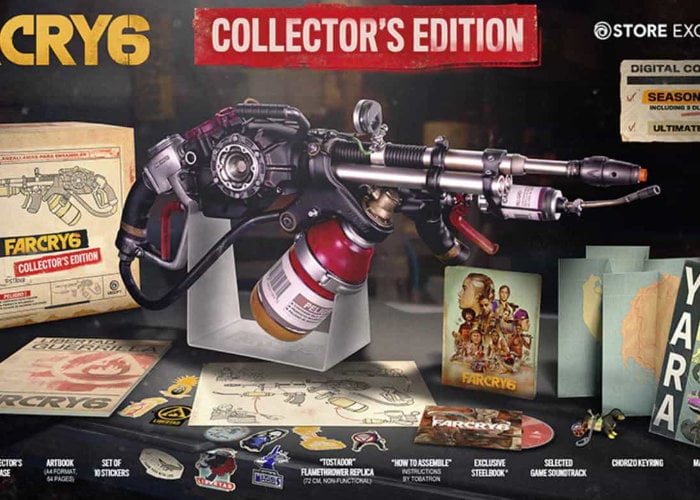 Accompanying the new trailer released by Ubisoft this week teasing the new Far Cry 6 game, preorders have also been opened ahead of the games launch next year on February 18th 2021. Far Cry 6 is now available to preorder for the Xbox Series X, Xbox One, PlayStation 5, PlayStation 4, PC and Stadia.

Far Cry 6 Gold, Ultimate and Collector’s Editions for Far Cry 6 will be available for pre-order:
– The Gold Edition will include the base game and the Season Pass.
– The Ultimate Edition will include the base game, the Season Pass, and the Ultimate pack, which includes Jungle Expedition pack, the Croc Hunter pack, and the Vice pack.
– The Collector’s Edition will include the base game, Season Pass, the Ultimate pack, a high-end display model of “Tostador”, the flamethrower from the game (7 parts to be assembled, length: 72 cm), a “How to Assemble” one-pager artwork illustrated by famous artist Tobatron, a unique Collector’s Case based on Tobatron’s iconic art style, an exclusive Steelbook, a 64-page Artbook, a set of 10 stickers, a Chorizo keyring, a map and a selected Soundtrack of the Game.

“Fans who pre-order Far Cry 6 will get access to the Libertad Pack which includes the “Libertad Outfit” for Chorizo and the state-of-the-art “Discos Locos”, a weaponized disc launcher that will make enemies dance on their own graves. Fans who purchase Far Cry 6 on Xbox One or PlayStation 4 will be able to upgrade their version on a next-gen platform at no additional cost after the launch of Xbox Series X and PlayStation 5.”

For more detail on each Far Cry 6 edition now available to pre-order visit the Ubisoft online store via the link below.