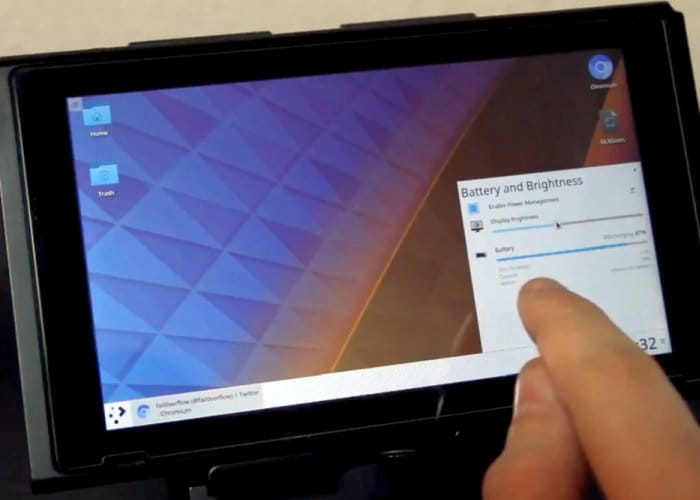 Nintendo Switch owners looking for a way to transform their console into a fully fledged Linux PC may be interested in a new exploit published by the fail0verflow team. Check out the video below which provides a quick demonstration of how the Nintendo Switch games console has been hacked to run the KDE Plasma desktop environment, complete with support for touchscreen input, internet connectivity, and 3D graphics.

As you can see from the video below the hacked Nintendo Switch is now capable of accepting multitouch gestures including features such as pinch-to-zoom support in the Linux web browser. As well as being able to adjust the screen brightness and even wake from sleep when the screen is touched.

At the current time fail0verflow has not released any instructions on how they have been able to complete this process, which is not advised if you don’t want to seriously mess up your $399 game console. As Nintendo doesn’t provide an easy way to load custom firmware on its latest game console.

But as soon as any more details are announced by fail0verflow on how they accomplished the transformation from Switch games console to fully fledged Linux tablet computer, we will keep you up-to-date as always. But for now jump over to the fail0verflow Twitter account to be kept up-to-date with details and more exploits from the team.

Code execution is all the rage these days, but can your Switch do *this*? 😉 #switchnix pic.twitter.com/NMnBq61tOM