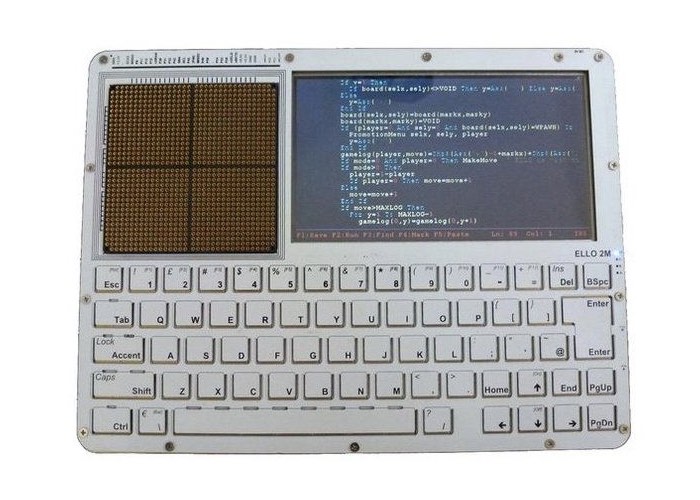 Konstantin Dimitrov has created an interesting mini PC project called the Ello 2M, that this month has launched via the Crowd Supply crowdfunding platform, and is available to back with pledges starting from just $65.

The Ello 2M comes in a kit that consists of six bare PCBs (printed circuit boards) that once built offers users a small portable PC that is equipped with a 7 inch touchscreen display providing a resolution of 800 x 480 pixels, together with a handy 1156 hole electronics prototyping space on the left of the screen.

If your budget can stretch a little further, there are also options available for more advanced systems that include a $180 “Developer” or $240 “Geek” edition. A “Hacker” edition is also planned as a stretch goal offering a 512kB of RAM, if the campaign passes $20,000.

The portable PC range are powered by a 32-bit PIC32 micro-controller and 128kB of RAM and is equipped with a 4,500 mAh battery is capable of providing up to 12 hours of use from a single charge. For more information on the new Ello 2M jump over to the Crowd Supply website for details via the link below.

ELLO 2M is the modern version of a REAL retro style computer with BASIC. ELLO is all about simplicity, learning, creativity, and pure joy of making stuff. ELLO 2M has no plastic enclosures, no molds, and no mechanical parts. ELLO 2M uses BASIC – a programming language which stands out with its simplicity and clarity. The version of BASIC used in ELLO is called MMBasic, which is a Creative Commons License written by Geoff Graham.

The entire computer is built as a thin stack of 6 PCBs with carefully designed shape and thickness. Add to those a 7” display touch panel and a battery, and you have the simple and elegant ELLO. Only eight individual components in total making assembly easy for almost anyone.