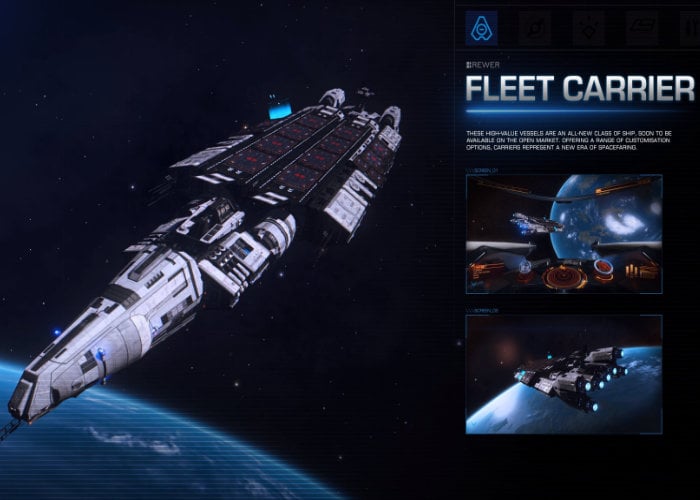 Frontier the developing studio responsible for creating the Elite Dangerous space simulation game, have this week announced they will be releasing more details about the highly anticipated addition of Fleet Carriers to the game next week on April 2nd 2020.

Elite Dangerous Fleet Carriers were first unveiled way back in 2017 and are now almost ready to launch later this year and will soon be entering a beta testing phase for PC players to enjoy later this month. Check out the previously published Gamescom reveal video below to read What you can expect from the huge Fleet Carriers, capable of jumping 500 light years and featuring 16 landing pads to accommodate a full complement of players. Fleet Carriers can be owned and piloted by a single Commander and will cost a staggering 5,000,000,000 credits.

Eurogamer explains a little more about what you can expect from the new edition to the ever expanding Elite Dangerous space simulation game. “Fleet Carriers introduce player-to-player commerce, enabling Carrier owners to set tariffs on all goods traded through onboard services. That money’ll come in handy for covering weekly upkeep costs, ship maintenance, and crew wages, and to purchase Tritium, a new fuel commodity required to power megaships.

Frontier stresses that it’s vital for Fleet Carrier owners to plan and balance their finances in order to cover running costs, as persistent debt exceeding the debt threshold may see carriers decommissioned and sold for parts. So basically, don’t stop playing Elite Dangerous, ever.”

Developers Frontier will be unveiling more details during the special Fleet-Carrier-focussed livestream, taking place on Thursday, 2nd April 2020 at 6pm GMT or 11am PST depending on your location. Frontier is also in the process of creating the Elite Dangerous’ mysterious next “major milestone” update rolling out later this year and has been  described as “a defining moment in the history of the game”.