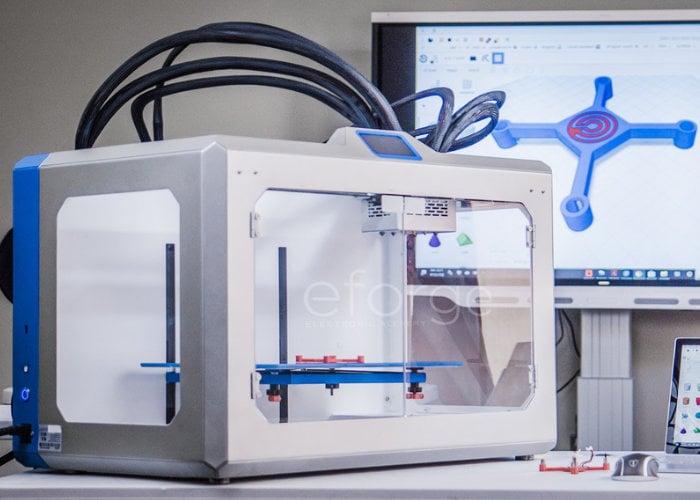 Early bird pledges for the eForge start from $4,799 or roughly £3,763 offering a considerable 40% saving the recommended retail price of $8,000. It all goes to plan with manufacturing and fundraising the team are expected to start shipping the electronic 3D printers during August 2020.

“Unlike conventional 3D printers, eForge is capable of printing both electronic and mechanical materials. The results open up an entirely new world of possibilities. It’s equipped with 8 extruders, retractable smart nozzles and an extra large build platform that have been meticulously designed for a seamless user experience. eForge fits in any environment and instantly increases the creative potential of amateur and professional creators anywhere. Sensors are everywhere and now you have the ability to print your own on-demand. Print temperature, pressure, haptic and plenty of other sensors exactly how you need them. “

As well as creating a new electronic 3D printing desktop machine, the team also have six patented 3D printing filaments that can be used with the eForge. “Conductive, Insulative, Capacitive, Resistive, N-Type Semi-conductive and P-Type Semi-conductive properties. They have been developed after years of university research and initial funding from NASA. These materials are incredibly unique and can only be printed with the eForge printer which incorporates the properly engineered elements needed to print functional electronics.”