As a species of robot, hexapods are quite prolific. There are more than a few of them spread across different labs taking part in experiments concerning mobility. In fact, there have been more than a few hexapod related posts here at Geeky Gadgets on previous occasions. But we’ve got fresh new son the six legged front, boys and girls. Seen below is EduBot, a build from the University of Pennsylvania whose specialized legs are supposed to reveal the secrets of springiness. 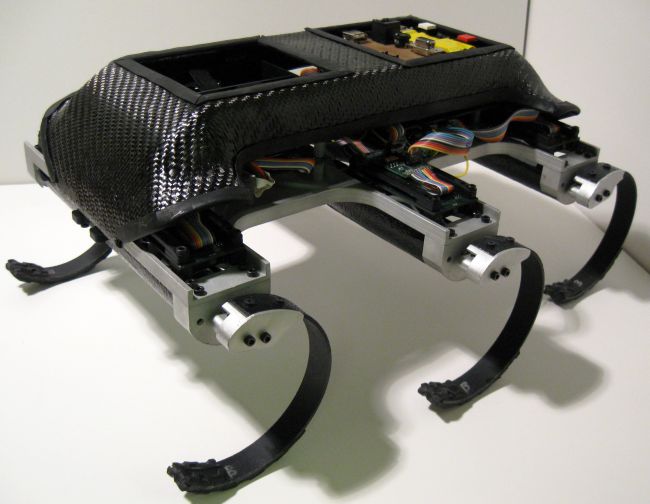 Indeed, springiness. Ever heard of the phrase “with a spring on your step”? Our feet are able to adjust the force of each and every contact with the ground in our manifold daily motions, apparently. The U of Pennsylvania people want the same for robots. Hence,

The goal of EduBot project is to develop a small form-factor modular RHex variant that is a cost-efficient education and research tool. The development of the EduBot platform started in late 2005 as part of the NSF-FIBR program. The platform has been employed in ESE112 and ESE313 which are two undergraduate level courses in the Electrical and System Engineering Department of University of Pennsylvania. The platform has also been used for various research activities and undergraduate senior design projects.

Another RHex variant akin to EduBot v1.0; SandBot is used actively by colleagues at Georgia Tech to study methods of traversing granular surfaces, such as sand, using a legged robot.

Beginning Fall 2008, our group have focused on the new generation of the EduBot platform which is more robust than the first version in terms of mechanics, electronics and programming infrastructure.

Okay, so the wording on that might have been too technical. For a simpler explanation, watch the vid below: