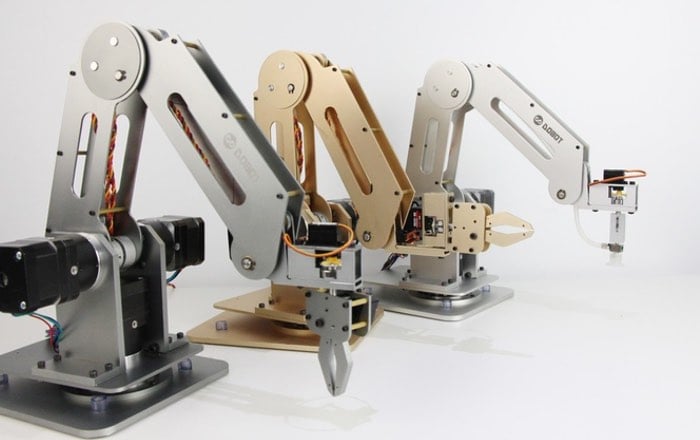 Dobot has been created by a team of six engineers based in San Francisco California and has been designed to provide a 4-axis high accuracy, high repeat precision, stepper motor, Arduino-based, desktop robotic arm for makers, educators and anyone else there would like to learn more about robotics and have their very own precision desktop programmable robotic arm.

The Dobot is currently available to back over on Kickstarter with pledges starting from just $399 providing a basic kit that enables you to get up and running on a budget. The team has also created further packages priced up to $799 providing additional attachments in the form of a clipper, sucker, laser head, angle sensor, Bluetooth module and pen clipper.

Dobot is versatile and designed for everyone. It can draw, write, text, move, grab things following your orders. It liberates your arms from doing repetitive tasks. For more advanced makers, Dobot has great potential to be an essential part of your own project.

Imagine when your new born baby says “flower” the first time in his/her life, and it gets sent to a robotic arm, automatically the word transforms to the character 花 (flower) in Chinese calligraphy on a piece of paper, or a 3D printed plastic flower, or be typed on a mobile phone that sends to your parents. it becomes tangible, sharable, and connected to one of the most precious moments in your life.

At Dobot, we believe there are beautiful and magical things that just cannot be explored, captured, and replicated by ourselves. That’s why the ultrasmart scientists and engineers invented space ships, and that’s why we created Dobot: to bring the untouchable to life.

Jump over to the Kickstarter website to learn more about this new Arduino-based open source robotic arm that has already passed its pledge: $36,000 with still 49 days remaining of its campaign. If you found this project interesting why not build your very own Arduino wind speed meter or anemometer to record the wind speed in your area.