Literally. Don’t you see the boiling water that meat is soaking in? What makes this particular build special, you ask? Well, your average Sous Vide Cooker is a gadget used by top-of-the-line culinary artists. The one pictured below was made by some guy who didn’t have the cash to buy the real thing. 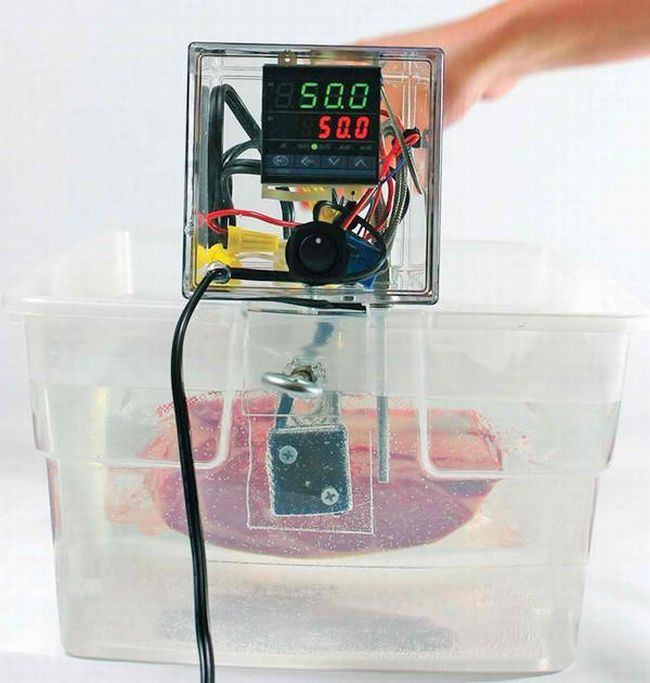 Since a real Sous Vide cooker will usually be in the neighborhood of $2,000, Scott Heimendinger decided to challenge himself with this a project. The end result was a smashing success and he was even generous enough to share the [detailed] how-to knowledge on Makeprojects. (Click on the source link for the whole scoop.)

Here’s the introductory text for the benefit of mankind:

“Behold, the $75 DIY Sous Vide Heating Immersion Circulator! By scrapping together parts from eBay and Amazon, I created a portable device that heats and circulates water while maintaining a temperature accurate within 0.1°C. And unlike the SousVide Supreme, it mounts easily onto larger containers, up to about 15 gallons, for greater cooking capacity. The water is heated by three small immersion heaters and circulated by an aquarium pump to keep the temperature uniform. An industrial process temperature module controls the heaters, and an eye bolt lets you clamp the entire apparatus to the rim of a plastic tub or other container. To cook sous vide, you also need a vacuum sealer, which this project does not include. I bought a good one new for about $112.”