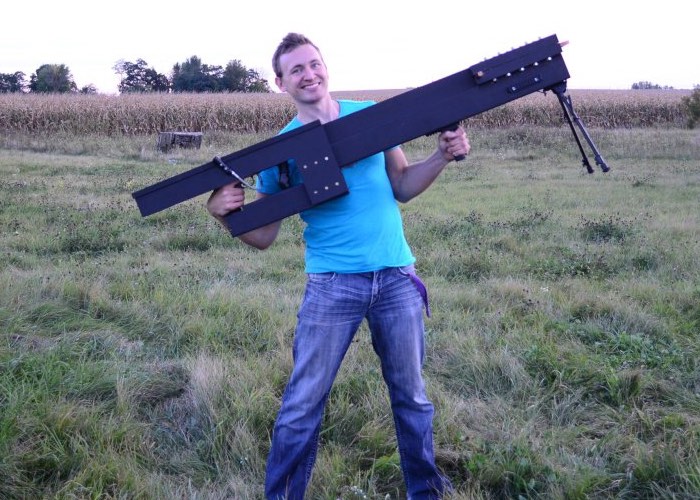 Check out the results in the video below as the DIY Railgun is tested out in open fields for the first time, providing some feedback on what needs to be adjusted and improved for its next firing.

A railgun uses current to generate extreme magnetic fields that propel a conductive projectile to high speeds (iron is a poor conductor and therefore unsuitable). Aluminum has been the universal projectile choice for its low melting point, high boiling point, low mass, and high conductance. This was a fairly successful test- the clamps blew off 15 milliseconds AFTER the projectile had left the device. Further advances in the projectile design will allow more energy to be transmitted to the projectile.

The kinetic energy is solely derived from electromagnetism-the CO2 is not great enough to overcome the friction of the rails! It is meant as a means of preventing intense heat and spot welding/rail erosion. We did not get a velocity reading or even find the projectile. The flash of sparks is to be expected- a good railgun projectile glides along and melts- reducing friction- like butter on a hot pan.

For more information on the new DIY Railgun jump over to the Ziggy Zee YouTube channel for more details.