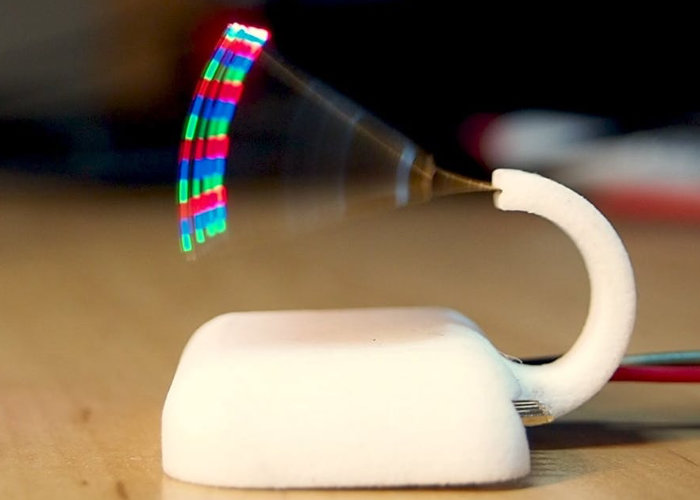 Makers and electronic enthusiasts interested in building their very own holographic display may be interested in a new tutorial by Carl Bugeja over on his YouTube channel. The Holographic FlexLED It is a simple POV display which can be seen in action in the video below.

“Last year I made this proof of concept of an LED mounted to a flexible PCB coil. This prototype worked better than I every expected, so I decided to give it another shot. After alot of brainstorming I came up with this simplified flexi-rigid design.”

To build your very own FlexLED holographic display jump over to the Hackaday.io website where full instructions, files are available. You can purchase the flexible PCB actuator from the Tindie website by following the link below.

“A micro-actuator made from a 0.13mm thick flexible PCB! It is basically a coreless flexible electromagnet, that can attract or repel neodymium magnets. I suggest using it with a N52 neodymium magnet. It can be controlled either through a single transistor to actuate two positions; off position and the attraction/repulsion position. It can also be powered with an h-bridge circuit to get three positions – off position, attraction position and repulsion position. By switching this transistor, the coil can be flapped with any frequency up to 60Hz. I recommended an operating voltage of 4.2V (1s Lipo) which draws around 180mA.”