Some of our readers will remember the Qlocktwo clock, that display the time in words rather than numbers, now you can make your own DIY version using the power of Arduino.

The clock can be made with a bunch of materials which include some LEDs, a CNC plotter and a laser printer. 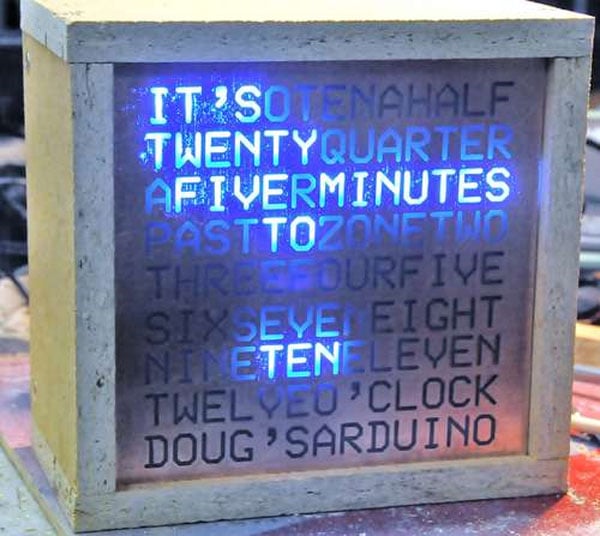 Last month I wanted to build a special gift for my beautiful wife, Megan.  She has a teaching background in English, so what better present to make for her than a clock that uses language to tell the time for her desk at work.

The original project that I created used a Microchip PIC microcontroller (16F877), because that’s what I had in the garage.  Since I published it (http://www.instructables.com/id/A-Word-Clock/), quite a few people, including my next door neighbor (Thanks Mikal) have asked me why I didn’t use an Arduino.  Having never used one, my automatic reaction to Mikal was ‘Whats a one of those??”  So, I did some research and found out what an Arduino was.  Wow – they are so cool – so simple to develop for, and the barrier to entry is so low!.  I ordered one from eBay, and re-designed the clock to use the Arduino Duemilanove as the controller.

If you want to make your own DIY Arduino Word Clock head on over to Instructables for a step by step guid.