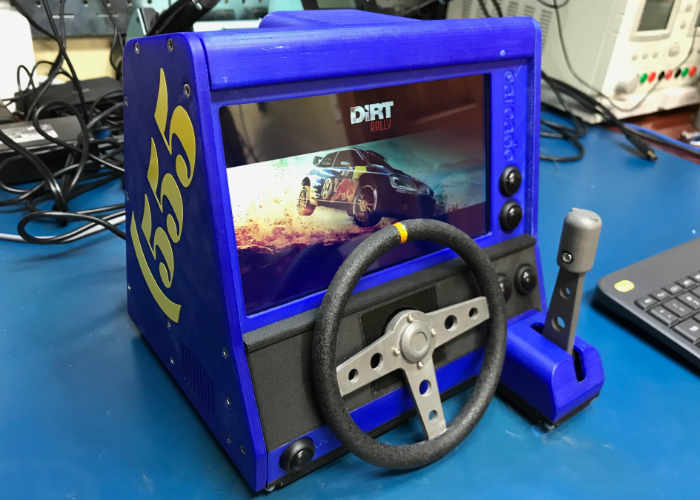 If you are looking for a new electronics/gaming project to keep you busy for the next couple of months, you may be interested in this awesome DIY Dirt Rally tabletop car-cade game created by Daniel Chote. Which includes a wealth of 3D printed components which may A cabinet inspired by the Subaru Impreza racing car Daniels preferred car within the PC Dirt Rally game. Daniel explains more about the inspiration and construction of the DIY car-cade games system.

For the longest time I’ve had the idea to put a Raspberry Pi into one of those kids car toys from the 80s. In August 2017 I was beat to the punch by Matt Brailsford when he published his Tomy Turnin’ Turbo Dashboard Outrun Arcade on Twitter. His project was so fantastic, I had to come up with something entirely new… I already had an Intel Atom powered dev board, the MinnowBoard. Surprisingly, SteamOS installed on it without any issues.
After playing around with SteamOS and Dirt Rally on the MinnowBoard without much luck (talking in frames per minute, not frames per second), I settled on the idea of building a full Intel powered system running SteamOS. I would then work on designing and 3D printing the entire enclosure from scratch. Initially I was going to design it with cues from the Audi Quattro, but I very quickly switched over to the 1995 Subaru Impreza, which is my preferred car in the game.