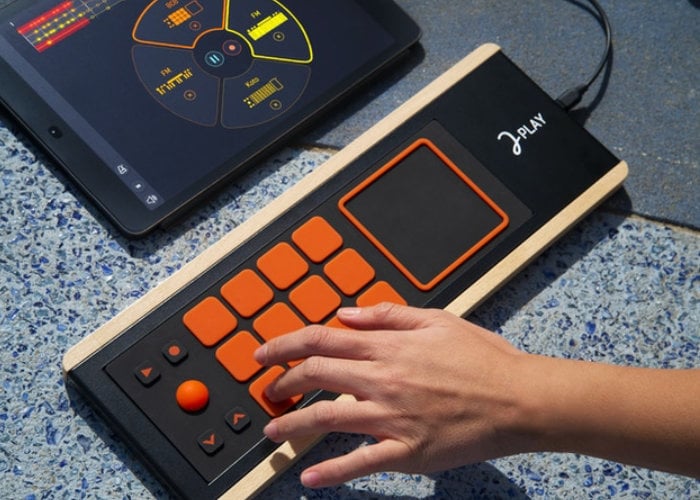 Joué has returned to Kickstarter this month to launch their second project in the form of Joué Play, offering a digital musical instrument that anyone can play, “make a beat, play a melody and build chords naturally”. Watch the demonstration video below for a quick overview of Joué Play and its features.

The four Pads on the Joué come with professional sound banks ranging from traditional instruments to the most recent synthesizers and drum kits and covering a wide range of musical styles. You can add up to eight different instruments per song, add effects and mix it all within the app. The Board of the Joué is super sensitive and captures all the gestures practiced on traditional instruments: vibrato, glissando, velocity. Early bird pledges are available from €267 or roughly £233 and worldwide shipping is expected to take place during October 2020.

The development team and musicians at Joué explain more about the inspiration behind their latest digital musical instrument. “Three years ago, we launched our first product on Kickstarter: an expressive and modular MIDI controller for seasoned musicians, which is used today by many artists around the world. But lots of amateur musicians wanted to get their hands on it as well, and we felt frustrated that we couldn’t satisfy them, as current music software remains too complex to be apprehended easily. So we decided to create a new instrument that would enable anyone to start making music. An instrument that’s really easy to use and fun, while being sufficiently powerful and evolutive to take you far into your music creation. Introducing the Joué Play.”

“The Joué Play was designed so that anyone can use it! Whatever your music skills or your age, the Joué Play lets you start making music straight away. No need for any theoretical or technical knowledge. Just place a Pad on the Board, start the application and create a beat, a melody or play chords freely. Chose your sounds, record, and share your creation super easily.”