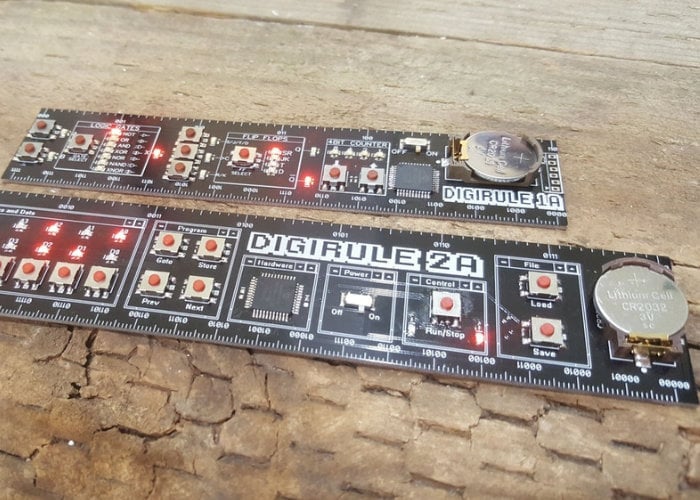 Bradley Slattery has returned to Kickstarter once again to launch his latest electronic device in the form of the Digirule 1A and 2A interactive binary rulers, designed to enable owners to program in binary, play with logic gates, flip-flops and more. Watch the demonstration video below to learn more about the two different versions which are equipped with a 8-bit PIC microcontroller, multiple push-buttons and LED’s.

Pledges are available from £11, AU$20 or $14 and worldwide shipping is expected to take place during August 2019 if manufacturing and the Kickstarter campaign are successful.

– The Digirule 1A is an interactive binary PCB ruler which features seven logic gates, four flip flops and a 4-bit binary counter, which is all powered by an 8-bit PIC microcontroller. Digirule 1A features :

– The Digirule 2A is essentially an 8-bit binary computer of the 1970’s, built into a 20cm PCB ruler. It features an 8-bit address bus, 8-bit data bus, eight data input buttons and 35 instructions for you to code your own programs. Digirule 2A features :