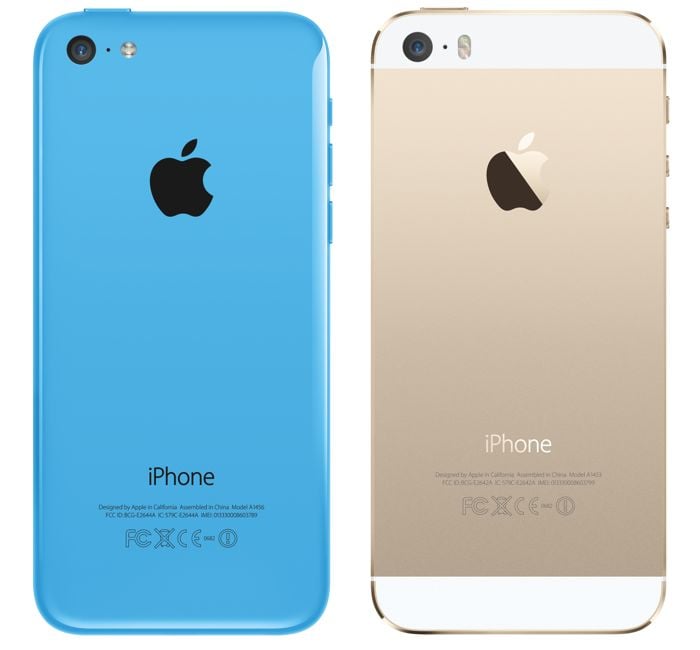 Both handsets share similar specifications, although the iPhone 5S has Apple’s latest hardware inside. The design of the two devices is different and they are made from different materials.

The iPhone 5C features a plastic casing, the handset is available in a range of bright colors, which include white, yellow, pink, green and blue.

The iPhone 5C and iPhone 5S share similar dimensions, although the iPhone 5C is slightly larger and heavier than the iPhone 5S, the handset measures 4.9 inches tall by 2.33 inches wide by 0.35 inches thick, the device weighs in at 132 grams.

The iPhone 5S features a case made from higher quality materials, the device feature an aluminum casing which is available in three different colors, gold, silver and space grey.

The iPhone 5C and iPhone 5S share some of the same hardware specifications, although the iPhone 5S has higher end hardware components in terms of the processor and more.

Both the iPhone 5S and 5S are equipped with the same 4 inch iPhone Retina display that has a resolution of 1136 x 640 pixels at 326 pixels per inch.

The iPhone 5S is the first of Apple’s new devices to come with TouchID, this is a feature that lets you unlock your device by placing your finger on the home button of the handset, the home button then scans your fingerprint and unlocks you device, TouchID is not available on the iPhone 5C.

Both the iPhone 5C and iPhone 5S feature an 8 megapixel Apple iSight camera, although the iPhone 5S version is an advanced camera that comes with some extra features.

The iPhone 5S camera is an 8 megapixel camera with 1.5µ pixels with an ƒ/2.2 aperture, it also comes with extra feature like auto image stabilization and a burst mode, this camera comes with an improved flash over the iPhone 5C which Apple calls the True Tone Flash, the camera has the ability to record slow motion video.

The iPhone 5C camera is an 8 megapixel Apple iSight camera with an f/2.4 aperture, it features an LED flash, and both handsets feature the same 1.2 megapixel Apple FaceTime camera up front.

The main software difference between the iPhone 5C and iPhone 5S is the new TouchID software which we mentioned earlier, this is a useful feature that adds an extra layer of security to your handset, it also makes the device easier to unlock, as you do not need to enter a passcode to unlock your device.

Both the iPhone 5C and iPhone 5S share similar specifications and features, the handsets have the same software, same display, the iPhone 5S comes with a faster processor, improved camera and a built in fingerprint scanner.

The two devices retail for almost the same, the iPhone 5S is $100 more than the iPhone 5C, so if you can afford the extra $100, then the iPhone 5S would be my choice out of the two smartphones.