A new and rather unique 3D Printer called the DeltaMaker has landed on the Kickstarter website looking to raise enough pledges to make the jump from, concept to production.

Rather than opting for a square box to enclose their new DeltaMaker 3D Printer, its designers have created a unique frame and mechanism hedsigned for taller 3D printed objects. Watch the video after the jump to learn more about the DeltaMaker 3D Printer project and see it in action. 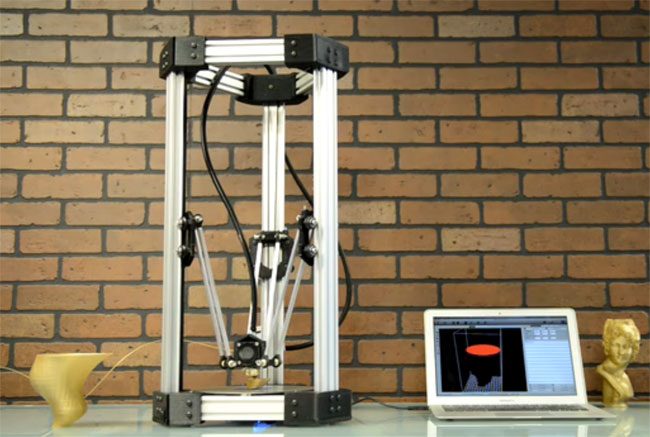 The team behind the DeltaMaker 3D Printer consists of a four person team with degrees in Aerospace, Electrical, Mechanical, and Software engineering, who have decades of engineering and product development experience, under their belts, and understand what it takes to engineer and produce complex systems.

“The DeltaMaker vision of 3D printing is a little different: The act of creation — and the finished work — can be equally interesting. We want to shift 3D printing from industrial spaces and back rooms to living rooms, waiting rooms, and classrooms.

Anywhere that you can inspire or entertain people, there is a place for a DeltaMaker. We see elegant 3D printers entertaining children stuck in waiting rooms, as some shape or creature arises from thin air. We see DeltaMakers prominently displayed in your living room, as your guests watch a reproduction of Venus de Milo arise over the course of a dinner party.”