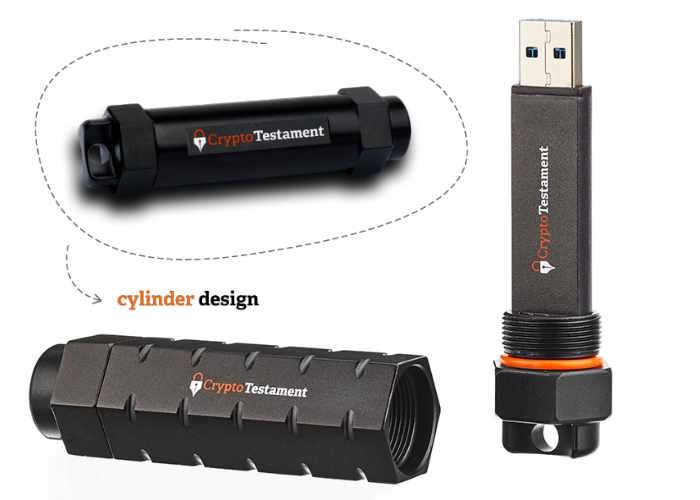 If you need to keep bitcoin accounts, digital files, passwords or anything else secure, CryptoTestament a new encrypted USB drive may be worth more investigation.

CryptoTestament has been launched via a Kickstarter crowdfunding campaign which is aiming to raise CAD$40,000 over the next 30 days to help take the project into production.

The USB encrypted storage is available in 8GB, 16GB and 32GB capacities and uses the same certification used by the NSA and other government agencies. The developers of the encrypted USB drive explain a little more about its inspiration, construction and security features :

CryptoTestament bridges the gap between estate laws, which grant families access to digital data, and privacy laws, which prohibit access, after a family member has passed away so digital legacies — passwords, important digital files and cryptocurrencies — are easily recoverable by heirs.

In today’s digital landscape, a person’s individual digital assets are vast. How many passwords can you think of quickly to online sites, such as Facebook, LinkedIn, GMail, or Twitter, off the top of your head? A recent survey by Intel Security said the average person has 27 digital passwords and that people forget, on average, at least one password a week. More and more important information — even currencies — are being stored and traded online.

CryptoTestament uses AES 256-bit encryption with a manageable console allowing CryptoTestament to unlock the device after death. AES stands for ‘Advanced Encryption Standard’, which is an encryption technology standard created by the U.S. National Institute of Standards and Technology (NIST) and all of your data will be encrypted with strong algorithms to protect against brute force, malware and spyware attacks. The USB-style encrypted device is available in 8GB, 16GB and 32GB sizes and uses the same certification used by the NSA and other government agencies.