Shenzhen, China, November 3, 2022 – Creality, a global pioneer in 3d printing, announces today the launch of the Ender-5 S1, the latest flagship of the best-selling Ender series at the price of $559. Featuring the upgraded motion system for 2000mm/s² acceleration and up to 250mm/s printing speed, the Ender-5 S1 is designed to be not just another “Ender”, but a flagship that integrates and reinvents the essence of this popular series.

“As a user-centric company, Creality strives to bring affordable 3d printers combining market-leading technologies and stable and high-level performance to 3d printing beginners and professionals around the world,” says Ao Danjun, CEO of Creality. “As the latest addition to our ever-popular Ender series, the Ender-5 S1 aims to be a leader in the desktop-grade 3d printer market and empowers users to turn their dreams into realities.”

Following the success of its Ender-5 series predecessors, the Ender-5 S1 continuously comes with an all-metal cube frame design featuring the classic Cartesian structure. It can be assembled in only 10 minutes, while the stability is further enhanced by two Z-axis 12mm Linear Shafts and two profile gussets. Unlike single gantry printers, each X/Y/Z axis of the Ender-5 S1 is driven by a powerful high-precision stepper motor, providing robust productivity. A steel transmission shaft was equipped to connect and sync the two Y-axis belts, significantly increasing durability and precision without compensating for the print speed. 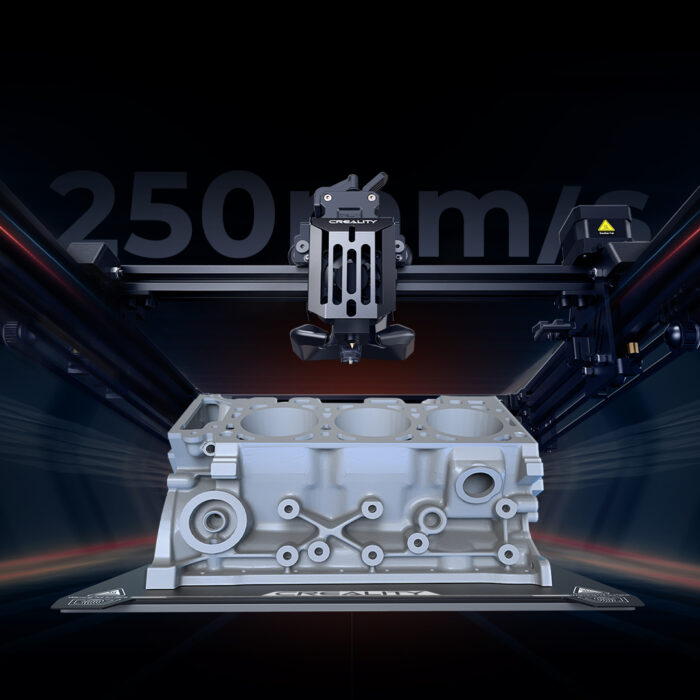 Test results from Creality Lab show that printing a 3DBenchy takes only 35 minutes at the maximum speed, saving 69% of the time compared to printing at 50 mm/s. The Ender-5 S1 also achieved a 100% success rate for 1000-hour printing at 250mm/s high speed and 0.2mm layer height, making it a reliable partner of studios, 3d printing farms, and other small to medium-sized businesses seeking to build up their production fleet.

The Ender-5 S1 is the first to feature high-temperature printing in the Ender-5 series, and it is made possible by Creality’s self-developed all-metal “Sprite” direct extruder. The “Sprite” features dual gears with a 1:3.5 gear ratio, delivering a powerful and uniform 80N extrusion force and is particularly capable when printing with flexible filaments like TPU. 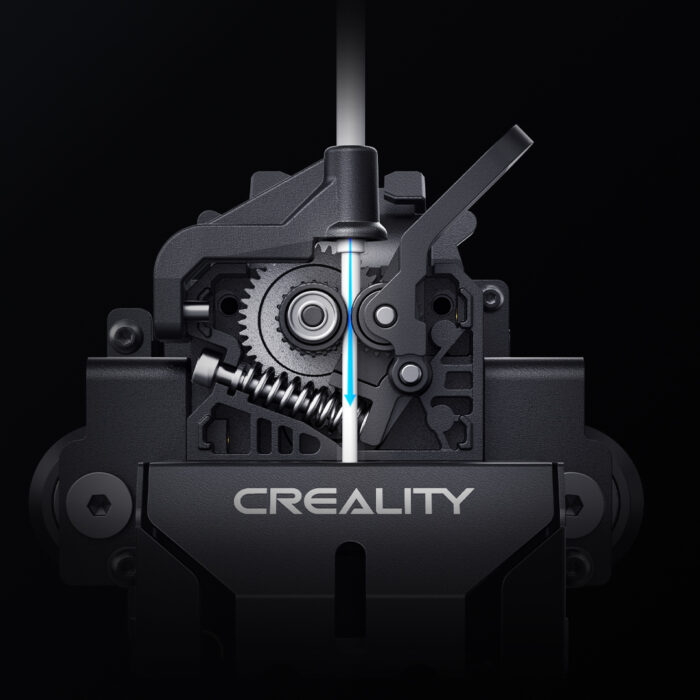 When the filament feeds in, it will first go through the Titanium alloy heatbreak with a low thermal conductivity that can sufficiently prevent heat creep. Then the corrugated heatsink and silent axial flow fan ensure the filament is cooled before reaching the hot zone.

Apart from regular filaments like TPU, a whole new world opens for 3d printing enthusiasts as a variety of heat-resistant engineering plastic filaments are brought into the game including ABS, PC, ASA, and HIPS. For users pursuing a better high-temp printing experience, an acrylic enclosure specifically designed for the Ender-5 S1 is available as optional for keeping the heat of the chamber. HP-ULTRA PLA and ABS, high-end filament series Creality co-developed with Forward AM, a brand of the chemical giant BASF, are also available for separate purchase.

In addition to the upgraded “Sprite” extruder, the Ender-5 S1 is equipped with extra cooling technology to deliver premium performance. A pair of “Urus” air ducts mounted alongside the nozzle channels the strong wind generated by a large 5015 fan to directly cool the freshly printed section. The deposited hot material will harden and bond up immediately, thus avoiding drooping or warping caused by overheating. The additional cooling method will improve print quality for overhangs, bridges, and other detailed objects. With the magnetic PC spring steel sheet that offers better adhesion of the printed models, users can also remove the model easily with a slight bend after printing.

Print bed leveling is a crucial part of the whole printing process. Creality’s CR Touch 16-point auto-leveling system is installed on the Ender-5 S1 by default, offering a hassle-free bed-leveling experience. For the perfect first layer, users are recommended to adjust the print bed first by the 0.01mm Z-axis offset and then the five-point auxiliary leveling before going through the CR Touch leveling method.

All the operations above can be done through the responsive 4.3-inch touchscreen featuring a wide viewing angle and a simplified UI. Temperature PID tuning function is also added for accurate and steady temperature control.

For the first time, secure aviation connector is applied in the Ender series, which debuts on the Ender-5 S1 for safe and stable power and data transmission. The 350W power adapter is also encased in the printer’s base for a safer user experience. There will be no more loose wires and cables on the printer as well, all coated with the nylon wire harness sleeve for safety and tidiness. 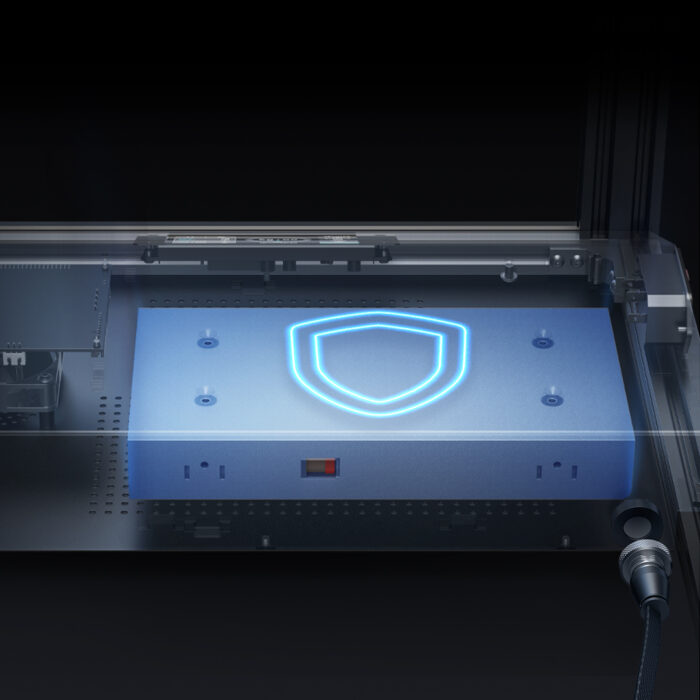 In addition to printing by inserting an SD card and connecting to the PC via USB cable, remote control via WiFi and time-lapse filming are also possible by connecting to the optional accessory Creality WiFi Box 2.0 + Camera Kit that can be purchased separately. Users can remotely control their printers via Creality Cloud app on the phone with the connection of Creality WiFi Box 2.0. 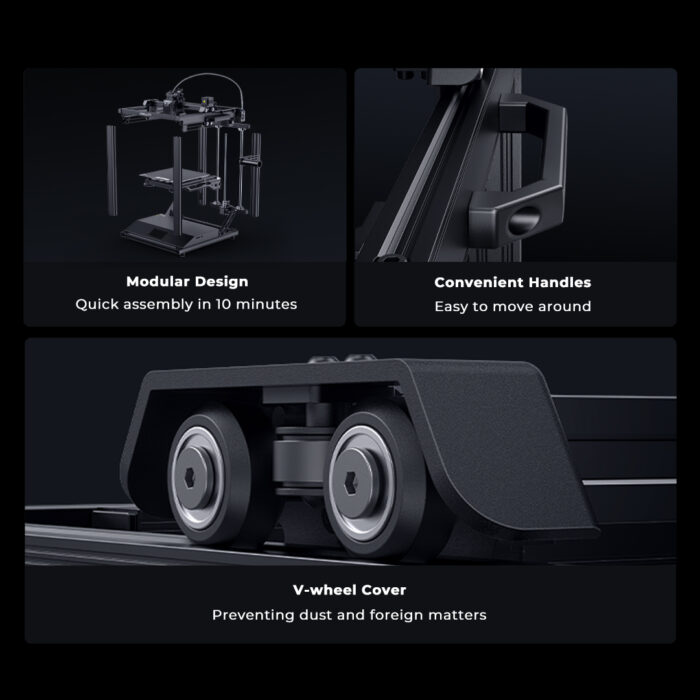 The Ender-5 S1 is available on November 3, 10 a.m. EDT at Creality Official Store for $559. The first 100 purchasers will enjoy an early-bird price of $469 and the first 50 will receive a 1kg roll of random-color Creality CR series filament as complimentary. Additional product information including images can be found here.

Glad to tell audience that Creality store UK is launched last month! We have prepared lots of coupons for UK Store. The following benefits are limited to British users.The original price of the new product Ender-5 S1 is £579, the price of the early bird is only £489!!The most first 10 buyers can get the CR PLA 1 roll with 1kg giveaway also, with random colors. Go get it!!

Founded in Shenzhen in 2014, Creality is a global pioneer in the 3d printing industry that focuses on the research, design and production of consumer and professional-grade 3d printers and 3d printing accessories. As a user-centric company, Creality has expanded its footprints across more than 192 countries and regions with products favored by more than 1.6 million users worldwide, introducing 3d printing concepts to homes, schools, workshops, factories and academic institutions, and driving digitalization in manufacturing, education, healthcare, architecture and beyond.

About the Ender series

First launched in 2017 aiming to be “the ender of DIY”, the Ender series quickly became a market sensation. With its innovative design, open-source compatibility and high-level performance, this series of FDM 3d printers constantly receives favorable reviews from beginners to professionals in the 3d printing community. Up to now, more than three million Ender 3d printers have been delivered to users worldwide, and are widely applied in maker education, art creation, industrial manufacturing, etc.

The Ender lineup is best known for the award-winning Ender-3 series and the cube frame Ender-5 series. Ender-3 S1 was nominated as the “top pick” in the “Best 3D Printers Under $500” list in 2022 published by All3DP, a leading magazine in the industry.