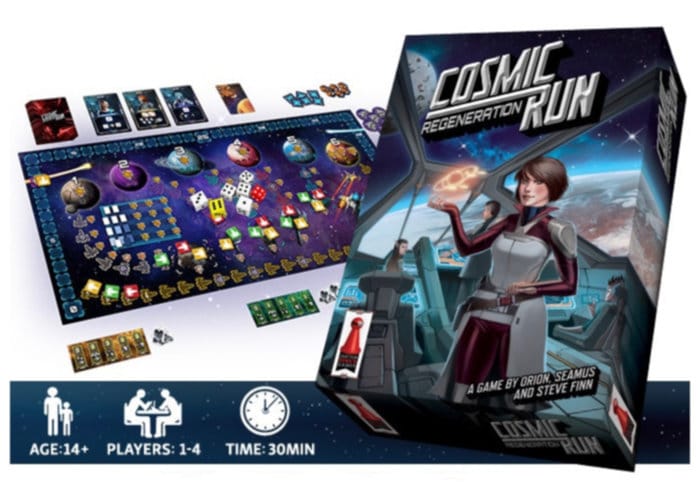 Dr. Finn’s Games has taken to Kickstarter once again to launch a new space inspired game for 1 to 4 players to enjoy in the form of Cosmic Run: Regeneration which has been created by the designer of Biblios, Herbaceous, and other great games. Watch the teaser video below to learn more about what you can expect from this new board game which has this month launched via Kickstarter and is now available to back with pledges starting from $35 or roughly £26. If all goes well worldwide shipping is expected to take place during December 2018.

The development team behind the Cosmic Run: Regeneration boardgames explain more about its gameplay and design. “In Cosmic Run: Regeneration, you lead a fleet of ships on a quest for the discovery of new worlds.  But watch out!  This region of space is populated with dangerous meteors that frequently hit the planets.  So you are not only racing your opponents, but also the meteors. Cosmic Run: Regeneration is a turn based game for 1-4 players.  You begin a turn by rolling 6 dice. After the roll, you must assign at least 1 die to planets (to move ships), alien cards (to recruit the aliens), or to your tech card (to gain crystals).

After assigning, you may re-roll any unassigned dice. All of the locations have different assignment requirements, so you must choose which kind of strategy to employ: Do you push your luck to try to move up more valuable planet tracks or play conservatively by placing dice on less valuable tracks? Do you recruit aliens who will help you score points and grant special powers? When should you spend your crystals? It is a game that is not only easy to understand, but contains many interesting decisions. A strong selling point is that the game can be played competitively, cooperatively, or solo.  Each of the variants have been fully developed and all offer a compelling gaming experience.”

For more information and to make a pledge to be one of the first owners of the Cosmic Run: Regeneration board game jump over to the official Kickstarter crowdfunding campaign page by following the link below.