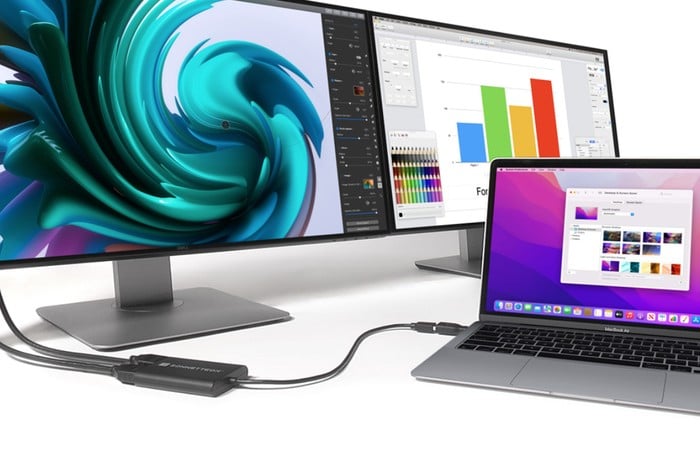 If you would like to connect to 4K displays to your new MacBook Air or Pro powered by Apple M1 Silicon, you might be interested in two new dual display adapters specifically created for computers powered by Apple’s M1 silicon. Two versions of the adapter have been created by Sonnet in the form of the DisplayLink Dual DisplayPort Adapter and DisplayLink Dual HDMI Adapter for M1 Macs.

Enabling you to connect two 4K @ 60Hz displays with a maximum resolution of 3840 x 2160 pixels using either DisplayPort or HDMI connections depending on your preference. The adapter uses a single USB-C port and offers a great way to gain additional workspace space when at your desk.

“hese adapters are Ideal for use with productivity software such as Microsoft Office, enabling users to work more efficiently by expanding their computer’s workspace — whether by opening multiple applications on their own screens, editing code or viewing spreadsheets in detail on a large display, or mirroring their computer’s display on a larger monitor. They can also connect a computer to a big-screen TV for browsing the web and watching videos on YouTube and other content at a distance.”

“The latest 13-inch Apple MacBook Air and MacBook Pro computers deliver great performance but include only two Thunderbolt/USB4 ports for connecting peripherals — displays included — one of which is used for charging the computer. More importantly, these computers natively support only a single external display.

Sonnet’s DisplayLink Dual Display Adapters for M1 Mac computers overcome the computers’ limitations to enable users to connect two 4K 60 Hz displays at once to one port on their computer, saving the other port for charging or for connecting an additional peripheral device.”

“Most dual display adapters are incompatible with M1 Mac computers, only support lower-resolution displays, or support just one display at a 60 Hz refresh rate (the other limited to 30 Hz).