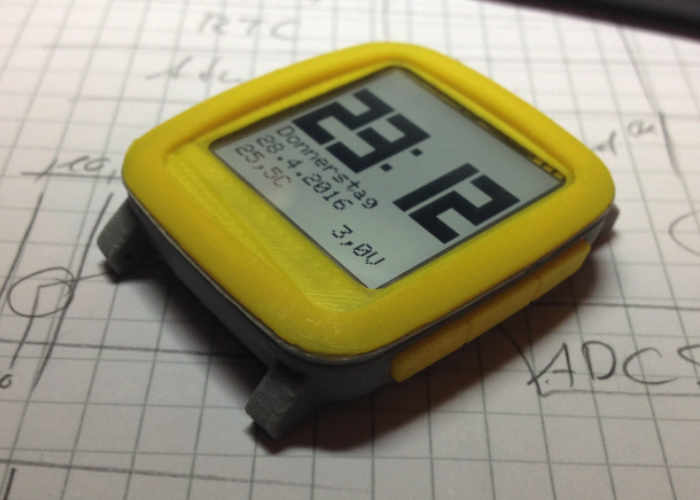 If you fancy owning your very own smartwatch but would rather not shell out hundreds of dollars on one of the more popular brands available. This awesome DIY Chronio Arduino smartwatch which is housed in a 3D printed case may be just the solution.

The DIY smartwatch project has been documented over on the Hack A Day website, with full instructions and videos detailing how to create your very own Arduino smart wearable, which is equipped with a 96x96 pixel Sharp Memory LCD and boasts a battery life of several months.

After assembling the third revision of the watch, I decided to test its battery life. Chronio is now running off of a CR2025 coin cell since August 7. During this time the display and RTC are on and the Atmega wakes up once per minute.

The calculated battery life is about 6 months, although that is not an accurate number. The varying current consumption caused by the 1 Hz generator makes it difficult to predict the actual battery life. Because of this there is no way around a real-time test to see how long the watch will last.

Next to the time and date, Chronio displays the battery voltage. For the past few weeks the voltage was between 2.84 and 2.86 V depending on the temperature of the room. Unfortunately Lithium-Ion batteries have a discharge curve that is anything but linear.

Hardware
• Microcontroller: Atmega328p with Arduino bootloader
• Real Time Clock: Maxim DS3231 (<2min per year deviation)
• Display: 96x96 pixel Sharp Memory LCD (LS013B4DN04)
• Battery: CR2025 160mAh coin cell
Features
• The ATmega is in Sleep mode for most of the time and only runs once a minute to update the time or if a button is pressed. This reduces the current consumption to 2uA. Sady the display needs a certain pulse every second, which requires a complicated additional circuit. Because of this the current consumption is around 20uA. This still makes for around half a year of battery life.
• User Interface controllable with three side buttons. Buttons are 3D-printed and activate switches on the PCB
• Tells time, date, temperature and battery voltage on the main screen. No additional temperature sensor is needed, because the DS3231 already has one integrated for temperature compensation.
• Stopwatch
• Flappy Bird clone (“That would have been cool in 2013”)
• The case consists of four 3D-printed parts. It has a thickness of only 10.8mm, which is thinner than the Apple Watch. Unfortunately it lacks screen protection.
• Fits any 22mm Watchband

Jump over to the official Hack A Day website for full instructions and details on how to create your very own Arduino smartwatch for a fraction of the price of one of the more fancy branded versions currently available from Samsung or Apple.