Ugliness seems to be the predominant characteristic of Chinese robots. The one pictured below even bears an uncanny resemblance to Ultraman except its not shooting lasers from its arms but slicing noodles. 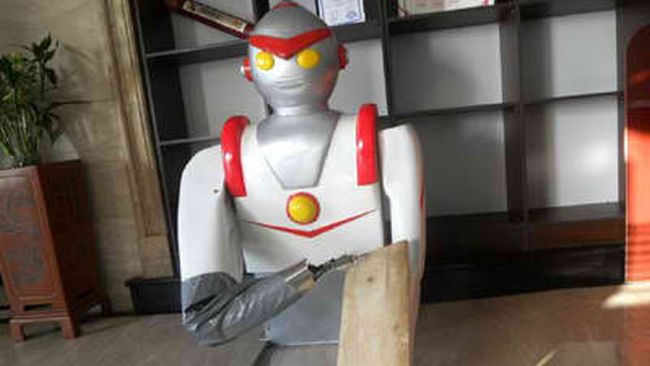 The noodle slicing ‘bot is the creation of a 35 year old cook who got fed up with the arduous labor involved in preparing sliced noodles. Sliced noodles go way back in China and there’s an art to the task, except for the noodle-slicing part, which is hard and hot work. A moment’s inspiration amidst the smoke and steam of a boiling pot of noodles compelled Cui Runquan to build his machine.

Though billed a Robot Chef (or Chef Cui, according to its creator), the tag is a bit misleading, since this particular robot doesn’t do much except slice noodles. Cui Runquan, who owns a restaurant, already sealed a manufacturing license and expects his mechanical noodle slicer extraordinaire to be rolled out to the public this year.

We have no word on whether the mass-produced noodle slicing robots will get a new look, which they badly need cos the Ultraman aesthete is a little too kitschy for our tastes.