After releasing a number of beta versions of its new Carbon Twitter Windows Phone client last year. Dot1ne has now announced the launch of its release version on to the Windows Phone Marketplace.

The Carbon Twitter app has been designed to reflect the Windows Metro styling and brings a number of features that Twitter users are sure to enjoy. Including URL shortening, image uploads, multiple accounts, Read It Later and Instapaper support, and threaded Direct Messages. 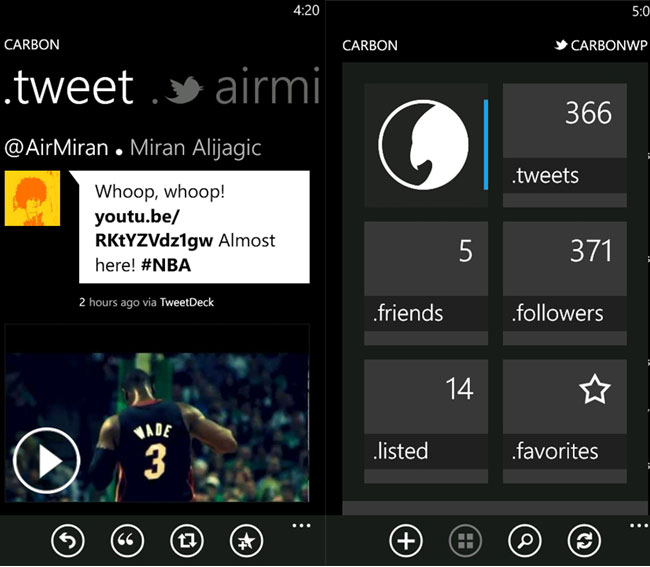 The new Carbon Twitter application also enables you to easily reply to tweets directly from within your timeline. Together with the ability to setup live tiles, enabling you to quickly keep up to date with hashtags, search and compose tweets. Dot1ne also say that Push Notifications will also be arriving very soon.

Dot1ne explain a little more about their new Carbon Twitter :

“Oh, and tiles! Compose Tile, pin this beautiful tile on your phone’s home screen and start tweeting in seconds without having to open the whole application. You can do the same with a Search Tile. Live tiles too! So you don’t miss any of your mentions or messages notifications. And if we add more tiles, we’ll be starting a flooring business. We’ve got you covered in Multi Account support, Read Later, Image Upload, Custom URL shortening, Threaded Direct Messages and image & video Previews right in the app.”

Carbon Twitter client is now available to purchase for Windows Phone devices, directly from the Microsoft Marketplace for $1.99.