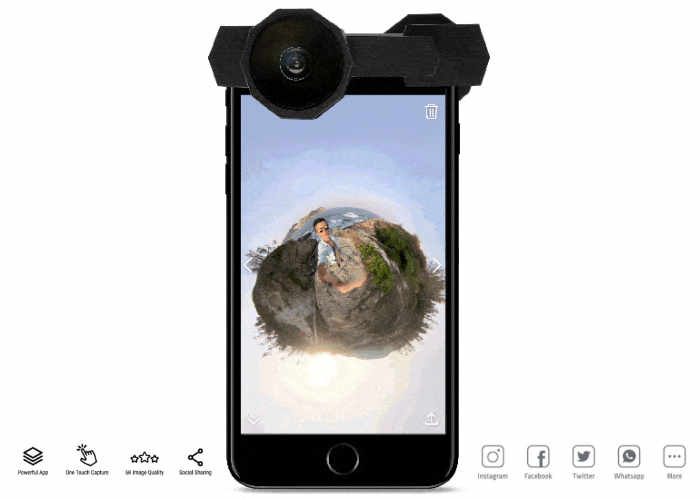 iPhone owners that would like to capture 360 video and imagery with a 6K resolution may be interested in a new lens adapter which has been specifically designed for the iPhone range of hardware and takes the form of Fusion. Created by NoMatterWhat Technologies Fusion is a battery free adapter that transforms your iPhone into a 360 degree camera. Watch the demonstration video below to learn more.

Fusion Lens is the world’s first battery-free lens that unleashes the power of your iPhone cameras to shoot immersive 360. Designed to fit everyday use, the grab-n-go Fusion Lens allows you to record every glamorous moment in full. Unleash the power of iPhone’s camera with Fusion Lens. Shoot 360 pictures with 6K resolution. Capture your glamorous 360 moments!

Fusion Lens is meticulously engineered for precise alignment between the lenses and the cameras. You don’t have to adjust the position. Just snap it on your iPhone. All set.  You just met the first 360 product without battery charging! We use your native iPhone cameras and battery. Just grab and go. Never worry about out-of-battery again! Fusion Lens is so portable weighing only 40-gram. It would not make your iPhone clunky and hinder your filming experience. The most carefree 360 shooting ever! Never wait for clumsy Bluetooth and Wifi connection again! Fusion Lens is perfectly integrated with your iPhone. Just launch Fusion App for shooting beautiful pictures!

For more information and to make a pledge from $39 for super earlybird backers jump over to the official Indiegogo campaign page by following the link below.