It’s supposed to mirror a person anyway, so it really would cross your mind to stick needles on the Elfoid ala voodoo doll. The Elfoid is a pint-sized variant of the Telenoid R1 telepresence robot by Japan’s Eager Co. Ltd. 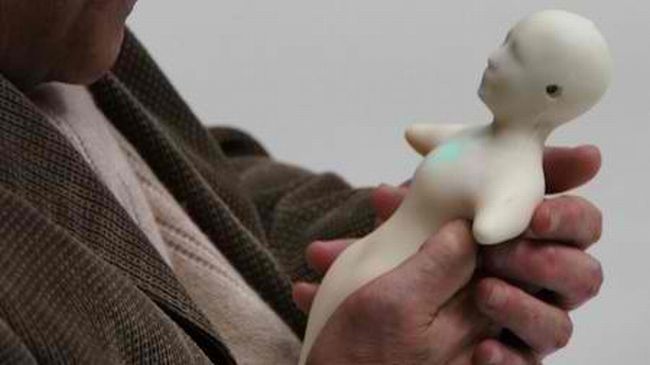 The Elfoid is just a concept, however, and won’t be hitting retail outlets anytime soon. Both the Elfoid and its larger Telenoid sibling were designed by Osaka University Professor Hiroshi Ishiguro with help from the ATR or Advanced Telecommunications Research Institute International. The good professor Ishiguro is known the world over for his robots and their humanoid facial features. The point being that having facial expressions in robots gives them emotional depth and fosters a soial link with the human they’re communicating to.

The same applies to the telepresence devices the Professor is now working on. The Elfoid in particular has a built in 3G mobile phone. The body upon which it’s embedded is supposed to be a caricature of the caller at the other end of the line. What’s the point of this technology? It lends a physical—albeit a fake—dimension to phone talk.

It would be cool if the Elfoid and its larger sibling can e customized like avatars. Now that would be nice representation.