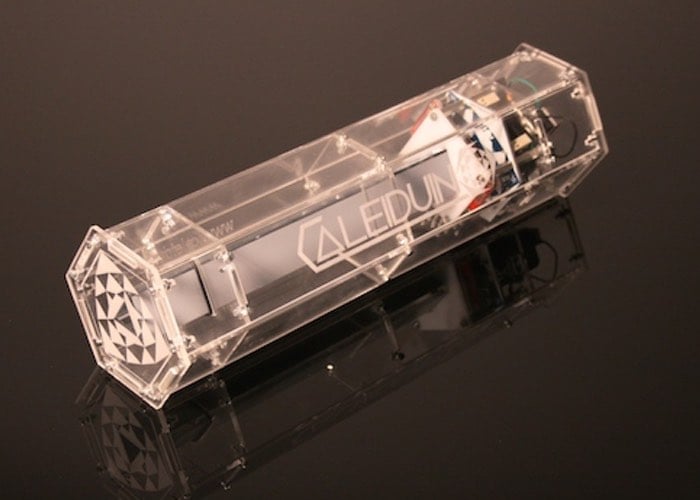 Arduino enthusiasts looking for inspiration for the next project may be interested in this new piece of hardware call the Caleiduino which takes the form of a digitally sound reactive Arduino kaleidoscope.

Watch the video below to learn more about the effects that can be created using the Caleiduino Arduino kaleidoscope which is being created using an Arduino Nano which is being combined with a TFT 1.8 “display, an analog 3-axis accelerometer GY-61, a piezoelectric, a switch, and a 9V battery.

The official Arduino website explains more about the project :

The CALEIDUINO is an Arduino-based digital and sound reactive kaleidoscope, designed to serve as a toy, an art object, and a tool for teaching electronics and programming in a playful yet creative way. In terms of software, the CALEIDUINO uses the Arduino IDE along with the Adafruit GFX and ST7735 libraries. The project is entirely open source and is the work of artist José Manuel González. You can read more about the device here, or see it in action below.

Just like in any kaleidoscope, t three mirrors in triangular prism shape, while an accelerometer collects a user’s movement to generate the psychedelic graphics and sounds.

For more information on the new Caleiduino jump over to the Arduino website for details by following the link below.

If you enjoy building Pi projects you might be interested in our comprehensive list of Raspberry Pi displays, HATS and small screens or our home automation hubs and system guide.