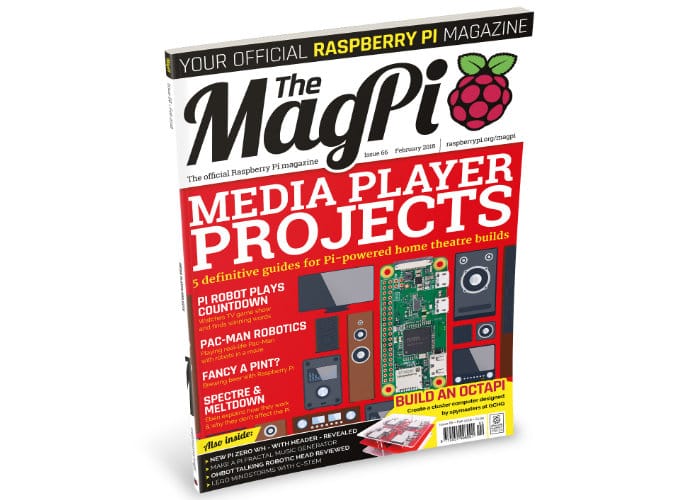 The Raspberry Pi Foundation is this week announced the availability of the latest issue of the official Raspberry Pi magazine MagPi. Issue number 66 is now available for Raspberry Pi enthusiasts and those looking to learn more about the awesome Pi mini PC platform. Providing inspiration and details on what can be built using the tiny computer and a few extra components.

This week’s MagPi edition includes five guides for building your very own Pi-powered home theatre systems. As well as details on why the Spectre and Meltdown exploit that affect both Intel and AMD processors doesn’t effect the pocket-sized Raspberry Pi mini PC. MagPi issue 66 also includes instructions on how to build your very own Raspberry Pi cluster computer such as the Octapi, designed and built by the spymasters at GCHQ.

To help you build your very own media player this months edition covers topics such as creating file servers for sharing media across your home network. Building your very own Pi-powered music streaming boxes that connect to Spotify. Or even designing and constructing your very own a home theatre PC entertainment system or if you prefer a “futuristic Pi-powered moving photo frame” all complete with Amazon Alexa voice control.

For more information on the latest edition of MagPi and to purchase or download your copy, jump over to the official Raspberry Pi Foundation website by following the link below. The website also includes details on the other publications available such as the Pi Projects Book and the new HackSpace magazine which is also now available to purchase and download from the site.