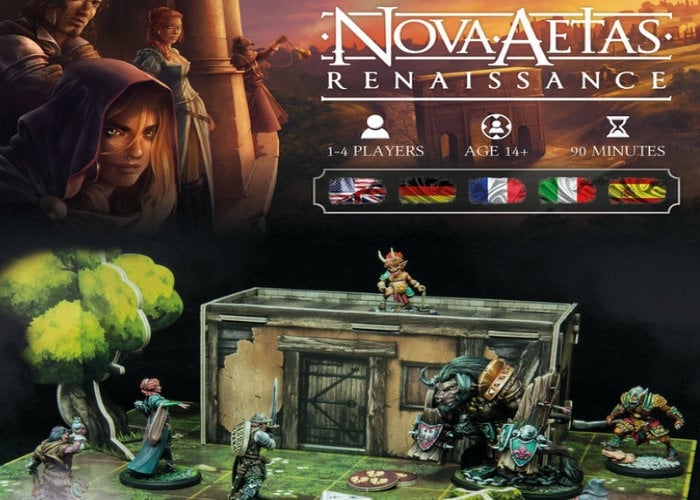 The Nova Aetas Renaissance boardgame launched via Kickstarter last month has already raised over $700,000 thanks to over 5000 backers with still 10 days remaining. Created by theLudus Magnus Studio the unique board game offers a ‘magical atmospheric” experience and is based upon historical events of the war between Rome and Venice in the early 1500s. Designed by Andrea Colletti and Luca Bernardini (founders of Ludus Magnus Studio, developers of the first Nova Aetas and Sine Tempore), Nova Aetas Renaissance will offer you fantastic adventures, with exploration mechanics perfectly paired with character development, and an exciting combat system says its creators.

“Let yourself be captivated by the magical atmosphere of Nova Aetas Renaissance! Set in a fantasy Italian Renaissance, this game will bring you into a mythical campaign. All models are in 38mm scale, in line with the most modern games. Below you can see our models compared to those of other popular games. To create this project our sculptors, Fernando Armentano and Tommaso Incecchi, out-did themselves, giving true life to the new models. Each miniature has been studied and developed to provide the best possible result for the final product.”””

“Nova Aetas: Renaissance is a reimplementation of our first game, funded on KS nearly 5 years ago. This new, improved version is born from the experience gained during these years, it will give you a deeper experience by immersing you and your group in a charming and mysterious Italy, full of historical characters such as Leonardo da Vinci, Caterina Sforza, and many others – both real and imaginary. All the illustrations of the game have been produced to reflect and remain faithful to the basic concept of the game: take a historical period like the Renaissance and spread a veil of fantasy over it, to make it even more exciting and unpredictable. It will truly be a magical game world you will enter.”

Immersive, story-driven exploration will bring the Italian Renaissance to life and a unique book offering over 100 pages of branched story scripts, provides players with a wide variety of different paths to take, as well as several different endings to your adventures. For a complete list of all available early bird specials, stretch goals, extra media and technical specifications, jump over to the official Nova Aetas Renaissance crowd funding campaign page by following the link below.