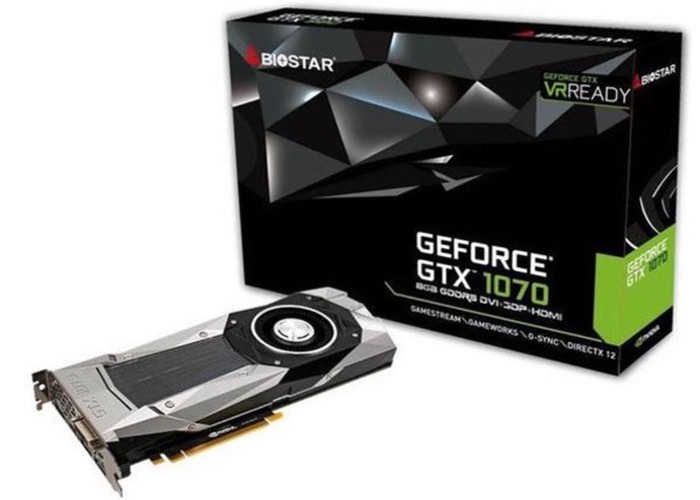 BIOSTAR today announced the launch of a new graphics card in the form of the BIOSTAR GeForce GTX 1070 Founders Edition, which is equipped with a high-efficiency GP104 graphics processor offering users a total of 1920 CUDA cores.

The BIOSTAR GeForce GTX 1070 offers the best balance of performance in price for high-end gaming applications. It allows gamers to enjoy this year’s best gaming title as well as incoming ones with stunning details together smooth performance and visual fidelity. Virtual reality applications are now more accessible with the BIOSTAR GeForce GTX 1070 and its capability to support virtual reality experiences with compatible headset with over three times the performance its last-generation counter-part and an overall 1.4x performance increase over last-gen in games performance.

The card features NVIDIA’s gamer-inspired cooler that keeps the BIOSTAR GeForce GTX 1070 graphics card running at optimal temperatures while keeping it whisper quiet for maximum immersion in your games. The GTX 1070 has a rated TDP of only 150W while still delivering three times the performance of last-generation graphics cards.

NVIDIA leverages new technologies for this generation of graphics card and allows players to fully immerse themselves while providing higher performance for existing games and serving as a launch pad for new ones. Technology like Simultaneous Multi-Projection, ANSEL and Fast Sync allow gamers to fully maximize their gaming experience but also enjoy a whole new level of realism with VR.